The Box of Delights
3: In the darkest Cellars underneath

Despite a grimy, evocative title the third episode is the least of the six. We’re treated to a nice little triptastic dream sequence, but there are a few too many longueurs along the way. To an extent such aspects are charming (a whole scene devoted to brewing up a cold remedy) but a run of such scenes makes the whole a little too lightweight.

Abner: I tell you, Sylvia. I’m tempted to get rid of Charles and his infernal ha-ha-what.

The first part of the first scene finds Abner questioning Rat and his nephew, in which Sylvia Daisy Pouncer (Patricia Quinn) making her first appearance. Quinn had appeared in both The Rocky Horror Picture Showand I, Claudius, but nothing could save her from the ignominy of hunting aliens a couple of years later in Doctor Who’s Dragonfire. Here, she meets Stephens theatrical flourish for theatrical flourish. Their attestations of devotion towards each other are studied at best (“My precious pearl, my blooming yellow sapphire”, “My golden idol, my graven image” “Oh but my emerald, my ruby”). And the impulse Rat warned of two episodes before has its first airing, as Sylvia seems curiously reluctant to let Abner mete punishment on Foxy Faced Charles (going as far as deflecting blame on Chubby Joe in order to curry favour for the Reynard-like minion).

Generally, Abner, for all his fearsome qualities, appears to have difficulty seeing what is under his nose. Not just the discontent in the ranks, but his refusal to countenance the idea that Cole would have trusted the box to Kay (fuelled, it must be said, by Sylvia, who holds him and his dreamy, idle, mind in “utmost detestation and contempt”).

When Kay announces to Mouse, “She used to be my governess. She’s a witch” he’s not being over-dramatic; as we saw, Sylvia was identified as a witch in The Midnight Folk. There’s nothing else here to suggest her involvement in the black arts, however; despite a verbal flourish, her villainy is decidedly mundane.

Rat: Ah, that’s the stuff. Poison! But I can feel it doing me good all the way down there.

The best part of this scene is the return of Rat, however. Bill Wallis is giving it his all, relishing every crude extravagance the dialogue may hold (“It’s poison, but without it I can’t stand the climate”, he attests when plied with a drop of rum). Rat and his nephew have clearly been in brushes with some sort of legal apparatus (“He says there’s so many of you here, it’s worse than when he was on trial”) such is the wide-ranging world of possibilities Masefield has created. The last we see of Rat is a dissatisfied Abner furiously venting spleen on him (“Get back to your sewer and have a bath!”)

The departure of Rat and his nephew heralds the arrival of another performer who can more than hold her own against Stephens and Quinn. Perhaps surprisingly, as the diminutive Dukes makes it clear, if there had been any doubt, that she is the most accomplished of the young actors in Box. Maria arrives on the offensive (she’s a dead shot with both hands and has been expelled from three schools) and doesn’t back down in response to attempts to bribe her with a visit to see some stained glass (“It’s a mouldy old lot of glass at St Griswold’s”). There’s an amusing rapport between her and Stephens; he’s all oily charm and she unalloyed antagonism.

With Maria possibly in with the villains (as Peter later comments “Well, if she has, I think that’s the purple pim!”) Kay does a bit of detective work once back at his normal size. There’s a nice touch where he realises he hasn’t taken his hat off indoors on greeting the hotel owner Mrs Calamine (the site of Abner’s meeting); back when manners were everything! Mrs Calamine (Joyce Latham) informs him that Abner is actually the Sir Reverend Doctor Boddledale, who is “a very well-known and very holy gentleman” (Masefield’s just rubbing it in with these unholy holy men).

Curiously Sylvia Daisy Pouncer (the Reverend’s wife) strikes a chord with Mrs Calamine; she “reminds me of someone I can’t remember who”. No doubt this had something to do with Sylvia casting spells. The production team appears to have compensated for the very variable weather in this run up to Christmas by announcing inserting announcements of downpours into the script; indeed, there’s no longer any snow in sight.

Kay has no more luck on his second visit to Tatchester police station. The Inspector informs him that Boddledale is “a very sweet tenor” and that he has “sung with him many times”. Grout indulges in a bit of close talking with Stanfield during this scene, and it’s a wonder the latter could keep a straight face. This is where the episode’s curious preoccupation with possets is introduced (requiring a jorum of hot milk); Kay is reliably informed that it will “make a new man of you, Master Harker” This is clearly an incredibly dodgy psychedelic brew, as we will shortly discover.

Whose voice is Punch and Judy man’s? It sounds a bit like Robert Stephens to me. The oncoming posset creation is as nothing to the tedium of the Bishop’s Christmas party. The bishop really is a mouldy old duffer (“Come and get your presents one by one”) and the dubious treat that follows is an extended bout of party games. Rye is evidently in no hurry with the plot, as we’re subjected to a narratively vacant unwrapping sequence. Even given the “justification” that the party disguises a burglary is insufficient pay-off.

There is more of what is now a running gag concerning the “bloodhound of the law” in respect of the pointlessness of contacting the police again, when it is discovered that Caroline Louisa was not on the train home.

All is sort-of well, however, as, under the influence of the posset brewed up by diligent Ellen (and boy, does she take her time making it), Kay has a crazy loopy dream in which he meets Herne dressed as a Roman. Herne sagely warns him that appearances may be deceptive (“It’s no lamb –two wolves under a fleecy skin”), an apt metaphor for Abner’s guise as a clergyman.

Some of the imagery retains a punch (the close-up of a wolf’s head turning to camera is enough to make you choke on your hot toddy) but most intriguing is the sight of the Old Lady, whose visage changes to that of Caroline Louisa; it’s a connection that is not elaborated upon (aside from the groundwork laid in The Midnight Folk). If Caroline Luisa is aware that she has magical abilities she never lets on. The sequence is the most striking in the episode, and bridges the questions regarding the fate of Kay’s Governess and the (apparent) answers.

At breakfast Kay fails to figure out there’s something fishy about Caroline Luisa failing to sign off his newly arrived telegram with “love Caroline Louisa” (the cloth-eared boy). The following scene, as Kay and the blessed Joneses go off to sail their toy boat on the floods, is one that unattractively highlights the shortcomings off grand effects sequences on a TV budget. It doesn’t help that, as a dramatic cliffhanger, it really isn’t all that dramatic. Charles and Joe arrive in the aeroplane caroplane (autoplane), attempting to find them. So the kids hold hands, go small, and climb aboard the boat. Unfortunately, treacherous “rapids” sally into view. 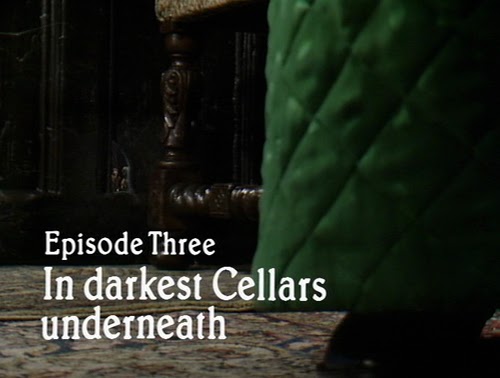 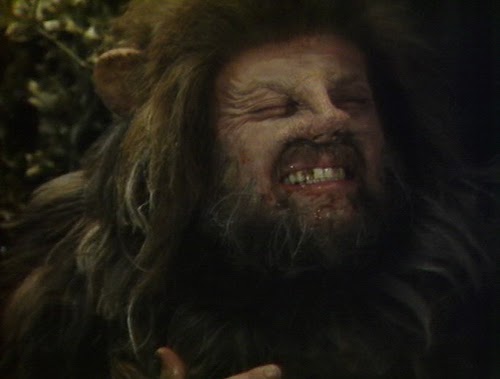 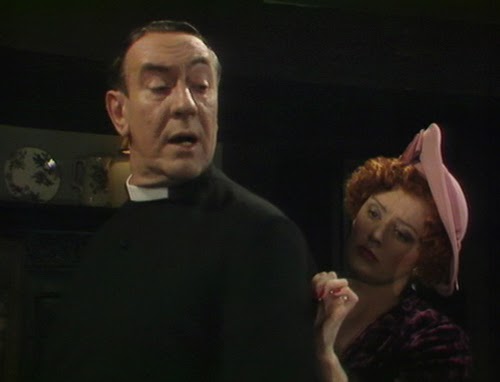 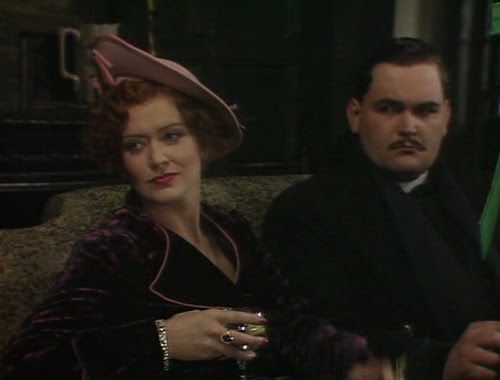 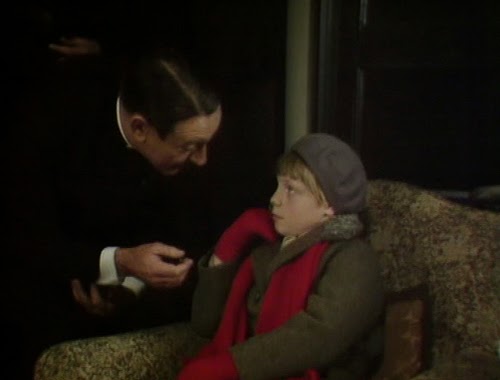 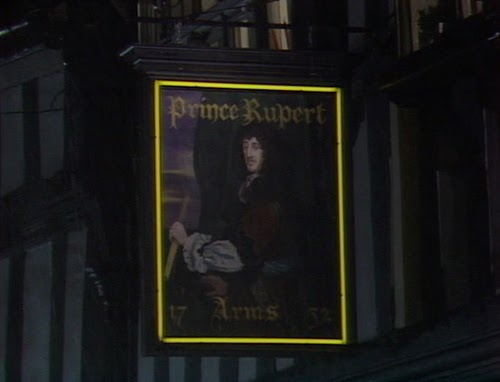 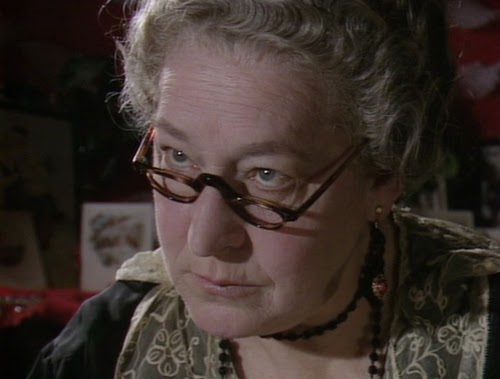 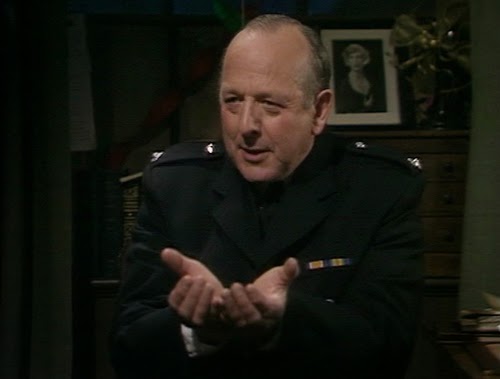 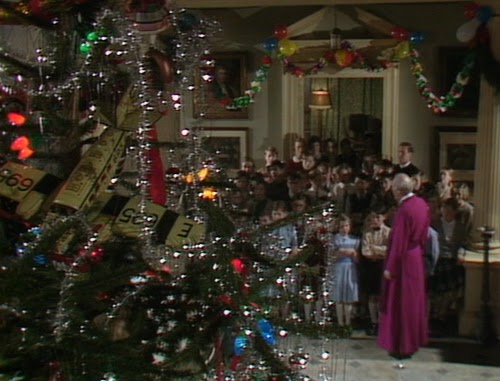 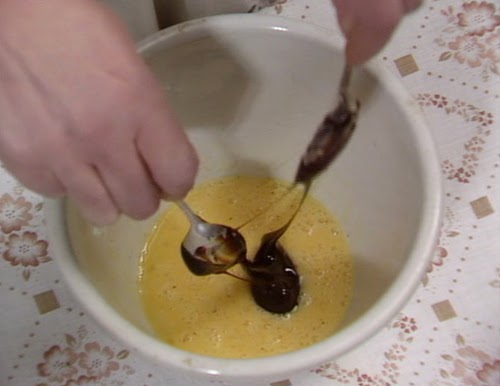 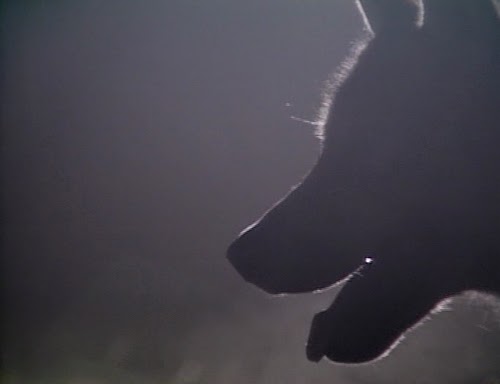 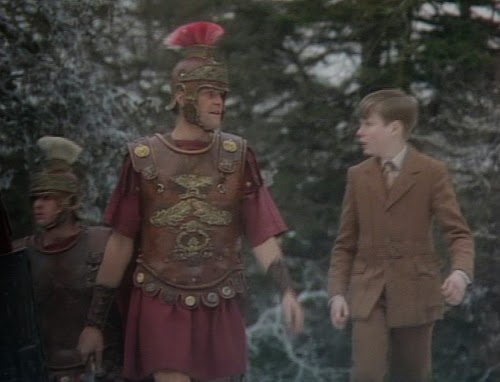 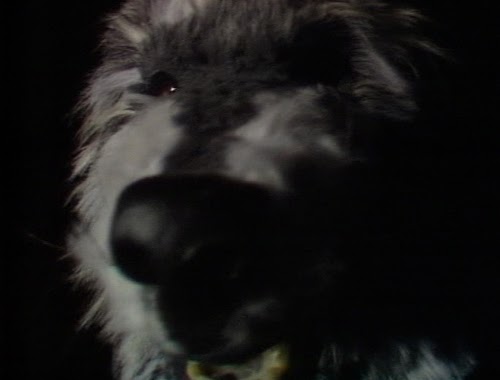 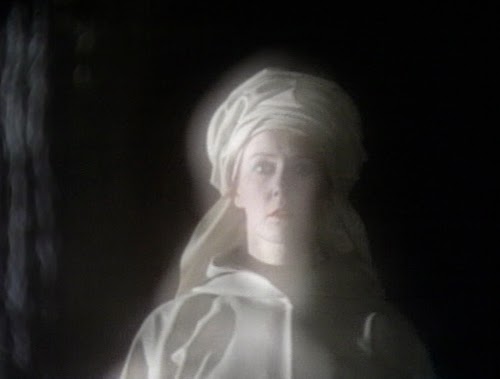 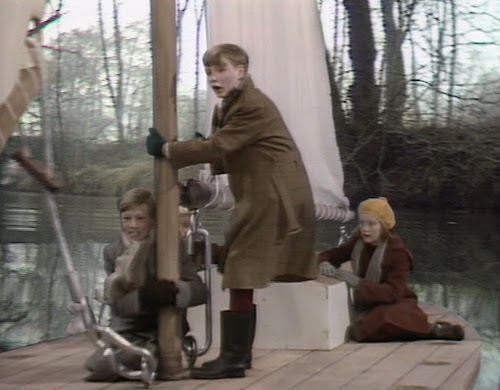 1. When the Wolves were Running
2. Where shall the ‘nighted Showman go?
4. The Spider in the Web
5. Beware of Yesterday
6. Leave us not Little, nor yet Dark