Nobody ever leaves the circle.

Children of the Stones
2. Circle of Fear

Episode Two focuses in on father-son theorising. The recovering Adam, who requires a large glass of Scotch to soothe his nerves, remains dismissive of supernatural forces. He sees the energy as electromagnetic, a “perfectly natural phenomenon”. So Margaret has to go to work on him as “a man of sensitivity”. It’s a curious conceit to fashion the scientist as a closet receptive, but it isn’t that uncommon; the hero has to be able to rise to the challenge of any forces that come his way. The magpie pseudo-science, pseudo-folklore reminds me a little of Doctor Who’s Image of the Fendahl, also concerned with scientists in a rural environment experimenting on ancient artefacts and encountering vast unleashed powers.

And, like that story (although much of that has tongue firmly in cheek), there are gloriously silly admissions such as “I read a fringe lunatic book on the psychic force in standing stones”, as if people put together a term like fringe-lunatic, and consider it viable reading. . Margaret’s understanding was that only certain people, “perceptives”, could feel the power, and it’s nice to see the constructive sparring of her objection to his electro-magnetism theory (“Even though you were earthed so was the stone?”), not to mention her witty making light of his experience; “You flew through the air with the greatest of ease”.

Matthew’s reaction to Dai is as unrestrained as kids hurling abuse at their elders probably got on mid-70s TV Series (“You – you nutter! You stupid old fool! Look at my bike! Look at my jacket!”)

Matthew: Oh no, the village idiot.

Matthew’s initial apoplexy would suggest he’s the sort to heed Charlie’s advice never to talk to strange men who spy on you through telescopes. Especially when they try buttering you up with compliments like “You’re different then. Not mindless like the others”.

Jones is as great as ever and, cast to type as a trampish country-oddball, he instils confidence that his array of knowledge of both poaching and science (theodolites) is broad. I’m not quite sure how he knew Matthew let one of his rabbits go to leave the message in his trap (unless he’s been using that telescope again), but the sight of him tucking into the cold collation Matthew has left him, with a bottle of cider, is most amusing. His admonitions concerning the stones (“Don’t meddle with the stones”) intrigue, most of all the chillingly off-the-cuff comment that Matthew and his father are trapped there.

Dai: Leave? What do you mean? Leave the circle? Leave Milbury? Leave the stones? You never will.

Matthew: What do you mean?

Dai: Nobody leaves the circle.

He qualifies this by adding further unexplained mystery, how one can “get beyond their sight boy, but never out of their grasp. Not until the day of release”.

The back-and-forth of mystery and deduction is well conceived. I have to admit, Matthew’s keen scientific acumen comes across as a stretch, however. The only sign of his misspent youth is ham and bananas with gerkin and honey sandwiches. We learn that he has embarked on his own investigation in which he attempted to clarify the direction of the stones, on the premise that they all lean slightly towards the centre (the camera work around the stones, using low angles and wide-angle lens – creates an effective sense of edginess and distortion). In fact, they are all “dead upright”. He only counted 23, of course; it would be 23, as that number is bound to show up even in non-odd TV and movies. The stones are all pointing in one precise direction – but upwards.

Adam: No stone circle was constructed at random.

Adam’s theory is that there is a giant dish under the ground, lending the entire circle a rock base. But he is baffled by the absence of an obvious path of alignment, so it is Matthew who provides the missing link. This is very much of a piece with the Quatermass and the Pit revelations that combine science, ETs and myth.  But Adam’s subsequent theorising is a leap into the dark, so he’s either secretly straining to unleash himself from the shackles of orthodox science or revealing what a sensitive man he is.

Adam: What we have here is a primitive Jodrell Bank immovably aligned with something up there.

He concludes that, if the dish was designed as a receiver for psychic forces, it follows that the signals must come from a force directly above it; this from a circle designed in Neolithic times. But why? There is nothing charted on that alignment path, so he asks Matthew to cable a friend in America at Montelimar Observatory.

The remainder of the episode backpedals on the theorising and concentrates on the sinister village undercurrents. Matthew attempts to make his father understand that the other kids are not normal, and then Adam leaves him home alone while he goes off for a pint (quite right too!) After his crackpot theory, he reverts to type with Margaret, commenting of ley lines “It’s all very unscientific”. And discussion focuses on where all the villagers have disappeared to, where they go to one night every month (“My guess is they turn into werewolves”). Only Lyle and Browning, also recent arrivals, were about. And the affable Hendrick comes back into focus (“He’s pretty well informed about the local phenomena”), his Highfield House identified as a focus of the village and having been built on the site of earlier houses (not dissimilar to the generational manor in Stones of Blood).

As per the last episode, we end on the stones, as Matthew, who has been dreaming of his picture which falls, sees the same imagery and chanting as his father. Going to the stones, he perceives a blue mist has formed with villagers standing in a circle. As he touches one of the stones, Dai appears and grabs him; Matthew falls to the ground.

At this point it appears that the ancient mystical has been identified as a negative force. Britain’s pagan past is something to be fascinated by but also to fear; it holds diabolical secrets, not enchantments that can free us. It’s an understandable trope to seize on, since it butts heads against the new religion that took control of the British Isles. Or perhaps, as subtext, the writers are suggesting that the past is as constraining as the present. The ‘60s saw a swing back to nature, to embrace old ideas and beliefs that had been neglected and were perceived to be spiritually liberating. Milbury’s ancient system is just another set of shackles. And the way to free oneself? The application of warped logic, if pseudo-scientists Adam and Margaret are any indication. 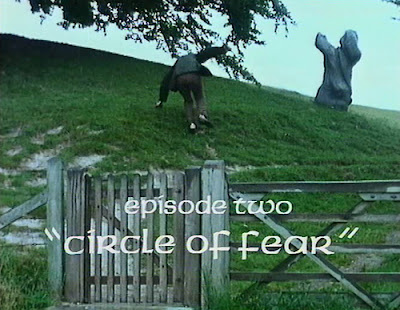 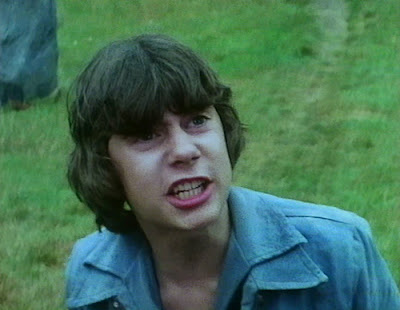 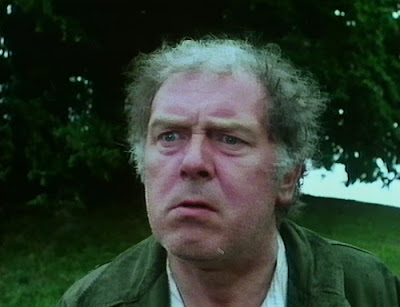 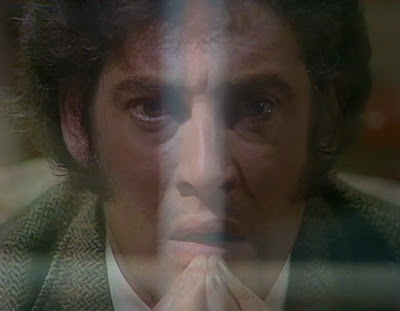 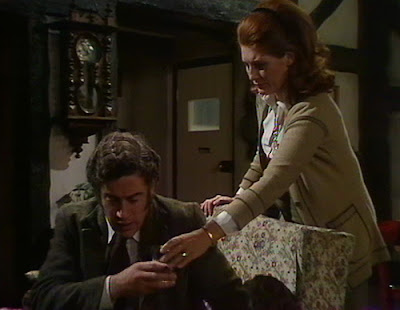 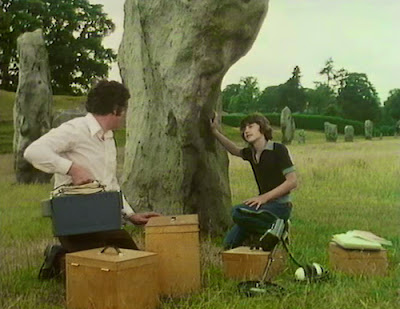 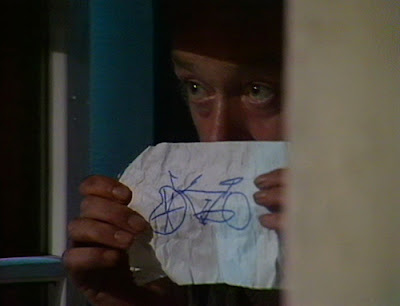 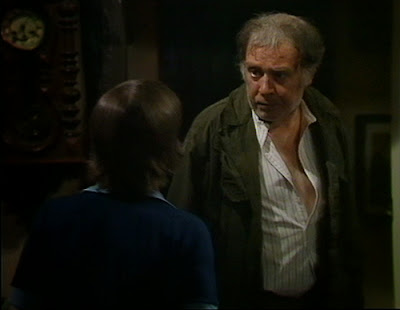 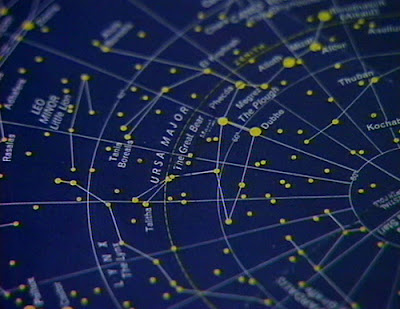 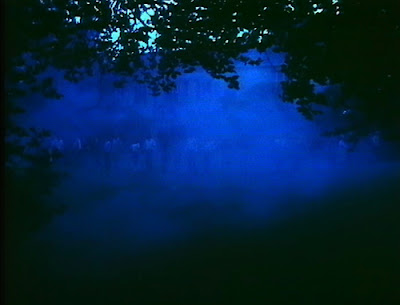 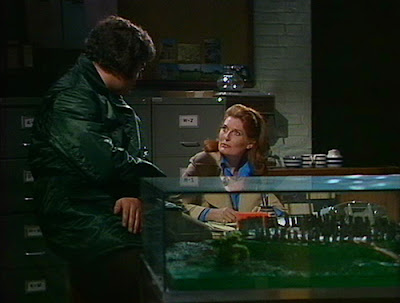 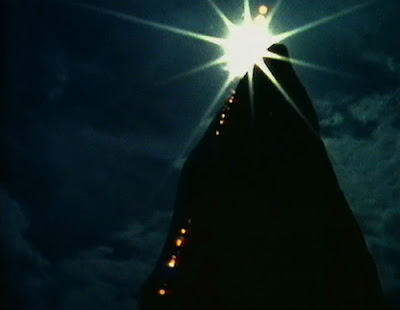