An end to male domination, my sisters. To freedom!

Joan Collins in Battle of the Sex Slaves. And a mad computer. This episode, co-credited to Ken Kolb (whose claim to fame is Ray Harryhausen’s The Seventh Voyage of Sinbad) and story editor/ex-Trek scribe D.C. Fontana, is at once both tiresomely obvious in its sexual politics and occasionally surprising in its narrative twists. It doesn’t get stuck in one mode throughout, and as a result proves surprisingly enjoyable.

Halyana: You were right. The complex has gone mad.

A fair portion of its watchability is also down to Joan Collins, the love interest of the best-loved Star Trek episode of them all (The City on the Edge of Forever; there are some familiar Trek sound effects in this episode, and throughout The Fantastic Journey). Always the budget version of Elizabeth Taylor, Collins tended to mix TV guest spots with less-than-acclaimed movies. The shoulder-padded Dynasty in ’80s may be her best-remembered period, but she attained a certain cachet during the ’70s as middle-aged hot stuff. She had entered her forties and, if anything, it proved to be her prime; she’d finish up the decade with back-to-back soft porn romps The Stud and The Bitch. Despite their dubious merits, her unabashed carnality proved quite alluring to the impressionable mind.

Here, she relishes the role of the patriarch-toppling Queen Halyana; it’s just unfortunate that the script furnishes the character with a great deal of empty bombast. She gets stroppy and then threatening with Varian and Willaway when they are unable to give her what she wants. And we end up seeing her as a bit of a silly woman who has got in over her head (surely not Fontana’s intention). It takes men to teach her the error of her methods (Willaway and Varian). Come the conclusion and she has reconciled herself to needing a good man to roger her; the decision to try and get along may be reaching towards an ideal, but it serves to undermine her and her sisters.

Willaway: You don’t seem to have too much regard for women in this society.

As is common with Journey’s “troubled society of the week” plots, this could fit into any given sci-fi series. Repeatedly in Journey, there is an almost cheerful disregard for internal logic. As soon as you start asking how the civilisation reached this point any pretence at dramatic integrity evaporates. King Morgan (Paul Mantee) presides over a rabble of brawny open-chested leather men (“It’s only a woman” he says of Liana). The women serve (including his wife Halyana) and there’s an all-powerful computer to take care of the everything else (the Complex – nice name).

Willaway: I’m afraid that mind may not be sane.

We learn that men built the city. Koriel is another example of prime ’60s/70s architecture, this time resembling a swiss cheese. They were also responsible for the computer, but the men we see in the episode are near-medieval lunkheads. One might assume that society has been devolving for some time, since these oafs (give Morgan some credit, he’s friendly enough to his fellow men) appear devoid of scientific knowledge. Morgan even comments, “What evil magic is this?” as the computer zaps his comrades. But Adrea (Julie Cobb) who reprograms the Complex (badly) states that her father was one of the machine’s designers. We are told that there are no more builders (within one generation?) No one bothers to address the imbalances between a technologically advanced society being so culturally and ethically backwards (see also An Act of Love).

Halyana: The city is ours. An end to male domination, my sisters. To freedom!

And why would a computer designed by sexist men have a female voice (perhaps because it is designed so that it “responds only to men”)? It sounds a little too authoritarian for the liking of these blokes.

The design work for the computer room is memorable. It resembles a child’s play set; primary colours, an enormous yellow button atop the computer and symbols that would look at home on the puzzle floor in The Adventure Game. As routine as it is, the malfunctioning computer is easily the best part of the episode and adds urgency to the plot.

Halyana: Where did the Complex put the men?
Adrea: I don’t know, your majesty. I don’t even think the Complex knows. Something has gone wrong.

The dematerialisation of the men to what looks like some kind of limbo (“It was a dark place, like a prison”) is the first of the episode’s peculiar choices. Where do they go? How does the computer achieve this? Initially, I expected a reveal that all the men were in fact computer constructs (that might have been interesting). But it’s much less high concept that that, with no logic to explain what has happened; this is a multi-faceted machine of unbridled potential, it seems. Then there’s the scene where Morgan materialises in Halyana’s chamber for some lurve action (“Why couldn’t you be like this all the time” she derides, before zapping him back to his dimensional dungeon).

Also introduced is a poison subplot; no one could accuse of Fontana and Kolb of a coming up with an incident-free story. The poison is only activated if you stop eating for a certain period. It’s not that these elements aren’t entertaining, but that the writers appear to have inserted them in a borderline random fashion.

Halyana: They’ll provide excellent breeding stock for our colony.
Willaway: Now you see here, I will not be referred to as “breeding stock”.

Initially it looks as if Liana will be the focus of the episode when Morgan and his pals kidnapped her (Sil-El, that pretty kitty, fetches the rest of the group after her). Perhaps because of Saylor’s illness (this is her last appearance) she ends up having relatively little to do (there’s a scene where Varian comes up with a ruse to keep Liana free, accusing her of being a lazy good-for-nothing).

Scott has little to do in this adult world (there isn’t a kid to befriend in sight), aside from overhearing that they’ve been poisoned. Varian offers the occasional pearl of wisdom; he’s resourceful and less recalcitrant than his original self. Halyana takes his explanation of the properties of his tuning fork as a refusal to allow her to use it. So he and Scott spend a fair bit of the episode writhing about under the influence of poisoned food (he also uses his Jedi tricks to take the strain of the effects Scott is suffering). Sil-El gets hissy with a robot cleaner (but is not endangered – phew!) Which means it’s mainly about Willaway and Fred.

Willaway starts out apparently sucking up to his dubious host Morgan, much as he did with Tarrant in A Dream of Conquest. Later he enjoys the episode’s standout sequence as he attempts to shut down the Complex in a countdown race against time (The Complex: You are destroying me!)

Fred: Listen, lady. There’s a lot of open territory between being lovers and mortal enemies.

This is the closest Carl Franklin comes to a proper plotline in the series so far. Yes, he’s still called on to do the Dr McCoy thing (analyse and cure his friends of the poison) but he also embarks on a fledgling romance with Connell (Beverly Todd). This may be utterly unconvincing but it makes a change from his propensity for pugilism.

The Queen asks for the menfolk back, to Willaway’s disgust, and for some reason they return changed. Varian advises them to go forward “not as enemies, masters and slaves, but as equals”. It’s all so simple! Like a disaffected couple seeking advice from a marriage guidance counsellor, both promise to try to make things work. It isn’t explained how Morgan could be “not as you were, but as I wanted you to be” when he appeared in Halyana’s bedroom. Nor is his complete change in attitude towards wifey clear; is he a big fraidy cat in the dark? As is often the case, the travellers do not initiate regime change so much as provoke a different perspective on the part of the rulers. All very civilised.

Fred: I hope you don’t expect you to call us Master Willaway from now on.
Willaway: No, er, Doctor Willaway will do. I have PhD, you know.

So how tightknit team by this point? De facto leader Varian continues to be blessed by Martin’s performance, even when his characterisation wobbles. Scott is a bit of a wet blanket, all told. It’s not so much Eisenmann, who manages not to be overly annoying as the wholesomely American-as-apple-pie youth, but that minors in family shows tend to suffer from predictability and limit story potential. Most consistent is Willaway, of course, and McDowall instantly became the show’s crown prince when he joined. Fred isn’t best served for plotlines, but Franklin has an easy chemistry with his co-stars (especially McDowall). Unfortunately, the exiting Saylor was never best used, albeit possessed of tremendous legs and a beautiful pussy; Sil-El rocks, and leaves a lion-sized hole in the show as he too absents himself from the last two stories.

Varian: Some men can’t abide one woman and others aren’t satisfied with a harem.

Curious last lines. Varian appears to be making a network-friendly reference to sexual preferences. Daring stuff. There’s a surfeit of groan-inducing dialogue and corny situations in Turnabout, but they help to infuse it with a so-bad-its-good quality. At rare points it is genuinely quite good, but mostly it’s winningly ridiculous. William Shatner would certainly have had a great time in his one. 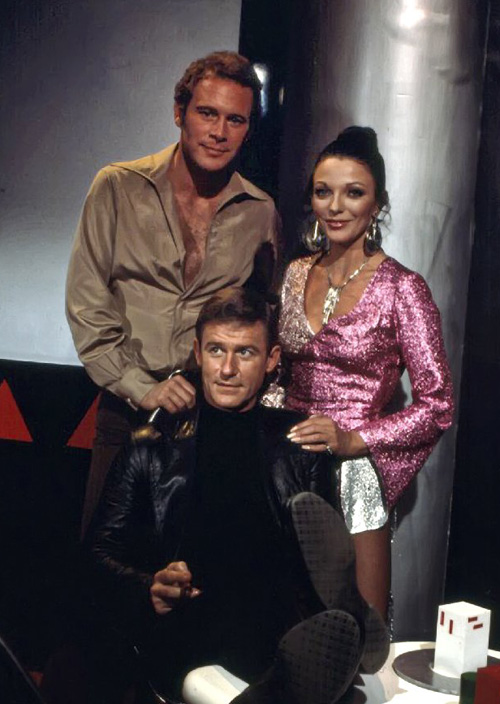