It doesn’t matter which side runs the Village.

The Prisoner
2. The Chimes of Big Ben

Number Six agrees to collaborate; if Number Two agrees to halt the interrogation of new arrival Number Eight. Six enters the Village Arts and Crafts Competition, but this is a cover for an escape bid he is planning with Eight. Six’s art doubles as a sailing boat, and he and Eight travel to London. Meeting with his bosses, Six is on the verge of discussing his resignation, but realises he is still in the Village when the chimes of Big Ben match the time on his watch; there should be an hour’s difference. It is revealed that Eight is working for the Village.

I’m prone to conflate The Chimes of Big Ben with Many Happy Returns, and neither quite work for me. At the root of this may be that Number Six actually escapes the Village in both (well, kind of in this one); battles of wits are reduced to more standard adventuring territory. The conflict becomes externalised.

It’s an episode that could be a typical example of what the series has to offer, if there were typical episodes. Number Six meets a new (female) villager, conspires with her, makes an escape attempt, fails, and it is revealed that she was on the side of the Village all along. What lifts it is Number Two, in the first of Leo McKern’s appearances; it’s little wonder McGoohan used him three times, as the two actors contrast with each other most effectively (even if McKern had a very difficult time of it with the star). In addition, the Village Arts and Crafts Competition provides for some amusing swipes at modern art and art criticism. Indeed, the actual “escape” only takes up the last fifteen minutes of the episode, and the twist is a neat one (albeit familiar to anyone who has seen The Ipcress File).

Chimes was the fifth episode produced, and many of the faithful suggest it should hold a similar position in any “proper” viewing schedule. The thought is that Number Six is clearly settled in at this point; he’s quite chatty with Number Two, and he takes on the mantle of tour guide for the newly arrived Number Eight (Nadia). I’m not sure I buy into the idea that such an attitude results from being worn down by previous failed bids for freedom. One could argue that Six, ever resourceful, tries a new tactic with his jailers after the failure of Arrival.

It is clear that time has passed since Arrival, but Six assuming Two’s role makes for an effective mirroring of the opener. His trust in Nadia certainly becomes less viable for me the further down the running order you put the episode. There is also an effective announcement of the hopelessness of his situation if his bids for freedom are undercut in such a pronounced way so early on. Won’t they always get the better of him?

The return of Christopher Benjamin (this time as Two’s direct assistant, it seems) also provides a direct bridge with Arrival and further suggests it is reasonably happy here. Additionally, showing McKern’s Two so early in the run makes his encore for the last two episodes all the more effective; there’s a symmetry to his bookending presence. Against this is an episode such as Checkmate, where Six enacts a more primitive escape bid.

I readily admit, however, that as far as The Prisoner goes I am a creature of habit. The broadcast order is what I’m used to and so it’s how I see the series as evolving, despite the inconsistencies this throws up (A. B. and C. and The General are much cited in this regard). I’m not dedicated enough to the idea that the series needs to show a clear progression (aside from its start and finish) to want to rearrange it accordingly.

Number Two: He can make even the act of putting on his dressing gown appear as a gesture of defiance.

McKern’s exuberant Two is an infectiously likeable presence. Even though you know Six is deceiving him, or thinks he is. He is apparently unguarded and full of jollity, while Six is the opposite; reserved, curt and antagonistic.

Their first scene together shows that Six is only apparently compliant, as he takes pleasure in contrarily putting two lumps of sugar in his tea (instead of the predicted one); his rebellion against the apparently omniscient Village apparatus. Prior to this he shut the speaker playing the annoying Village muzak in his fridge to silence it; at this point he is showing not rage but efficient ways of counteracting predictable control mechanisms.

When he chats to Two he informally sits on the latter’s desk, a test of how far he can challenge authority without a response. But he also nonchalantly instructs a delighted Two that he will “Escape, come back and wipe this place off the face of the Earth, obliterate it, and you with it”. He continues to ask the same questions, but in a more rhetorical way now; he’s no longer expecting an answer:

Six: Who are these people? Why are they here?
Two: Why are you?

Two: It doesn’t matter which side runs the Village.
Six: It’s run by one side or the other.
Two: Oh, certainly. But both sides are becoming identical. What in fact has been created? An international community, a perfect blue print for world order. When the sides facing each other suddenly realise that they’re looking into a mirror, they’ll perceive that this is the pattern for the future.
Six: The whole Earth as the Village.
Two: Yes. That is my hope. What’s yours?
Six: I’d like to be the first man on the Moon.

This is a very similar view to the one expressed by Soviet spy Kropotkin in the 1967 satire The President’s Analyst:

Kropotkin: This isn’t a case of a world struggle between two divergent ideologies, of different economic systems. Every day your country becomes more socialistic and mine becomes more capitalistic. Pretty soon we will meet in the middle and join hands.

If you remove the “illusory” notion of ideologically clashing power blocs, if all nations operate to the same template, what are you left with? The struggle of the individual for individuality, in a world village where everyone behaves in the same way, dresses the same way and conforms without challenge. Ultimately McGoohan pushes the series a stage further than this, whereby the one state is also insubstantial when set next to the shackles of one’s own mind and ego. But solid philosophical groundwork is laid here for later developments.

Six: I’ll make you a handle for this door.

I think part of my problem with this episode is that I’m reluctant to accept Six being swayed by trickery he should be expecting, and still more by a damsel in distress. As I say, I would have even more difficulty buying into this if it were later in the run. As the initial tour guide Six is cryptic and concise, but he is not overtly antagonistic (he offers her non-alcoholic whiskey or vodka).

We’re reminded of the more science fictional/surreal elements of the show in Nadia’s apprehension by Rovers and her subsequent interrogation, but such aspects are very much in retreat this time out (perhaps because the trick played on Six is so plausible, it was considered appropriate not to emphasise the heightened milieu. It’s her apparent suicide attempt that convinces Six she is genuinely a prisoner (“Let her go and I’ll collaborate”).

In a traditional series, Nadia would be the hero’s love interest but this is one of the instances where McGoohan reportedly nixed such notions (scripter Vincent Tilsely was critical of the star’s changes in this regard). There’s a scene of faked canoodling where McGoohan apparently had his daughter stand in for Nadia Gray, such were his scruples. But if he were that disapproving, wouldn’t he have restaged the scene entirely.

Six: Abstract art is basically primitive. I’ve… I’ve made my own tools.

We visit the woods set for the first time as Six shows he’s a bit of a D.I.Y. genius; not only can he fashion a boat, but he can manufacture the tools with which to hew it too! The sequences showing his preparations for the competition are sustained by Two’s surveillance and involvement. Tilsley and returning director Don Chaffey (his final contribution to the series) do a reasonably a reasonable job of making it seem as if Six is hoodwinking his slave masters, but that’s down to the engaging the satire of pretentious artistry. We don’t dwell too much on how Two seems all too encouraging of Six bending the rules for his entry and is apparently oblivious to the possible uses for his creation because the show distracts us (an earlier draft made Two’s awareness of what was going on clear).

Man: We’re not quite sure what it means.
Six: It means what it is.

The sight of every entry (except Six’s) paying tribute to the image of Number Two is most amusing, from a watercolour portrait, to a tapestry, to a chess set. But Six titling his entry “Escape” is a little on-the-nose if his intention is to fool Two (unless he considers drawing attention to such thoughts will put him off the scent; a double bluff). There’s a hint of a cute comparison of his art to organised religion (a church door) but, whether or not this was cut by McGoohan because of his sensibilities, I think Six’s nebulous non-explanation of what his piece means works best, along with his insincere gratitude for first prize (“Um, my work is its own satisfaction”).

Man: Why the crosspiece?
Six: Why not?

It’s lucky that Number 38 produced a piece that could provide a sail for his boat, and I’m afraid I don’t find Six’s lack of interrogation of Nadia or the ease of his escape route especially convincing. He never gets a clear confirmation of whom she works for, and the terribly convenient chap waiting for them at the shore should have rung alarm bells.

Six: I resigned… because… for a very long time I…

Six’s realisation that this is a ruse, before he has given the game away, is much needed (well, obviously, or the series would have blown its wad), but there’s a nagging sense that he should have sussed out that something was amiss before then. It’s only that this is so early in the broadcast run that lefts him off the hook.

Eight: Don’t worry. It was a good idea and you did your best. I’ll stress it in my report.

Eight’s parting comments emphasise that Two is just a cog in a wheel; she has the influence to bring about reprimands for him if it is considered appropriate. As an undercover operative she echoes Cobb in Arrival, while the lenient attitude to Two’s failure suggests the plans for breaking Six are still at a formative stage; later Two will come under greater pressure, with punitive measures threatened.

I like Chimes, but it doesn’t grab me the way the top tier of episodes do. McKern is its greatest asset, but Grey is saddled with a rather one-note character who only has an extra dimension in retrospect (even then, repeat viewings don’t really reward this knowledge). It’s neatly constructed and tidily resolved, but lacks that extra spark. 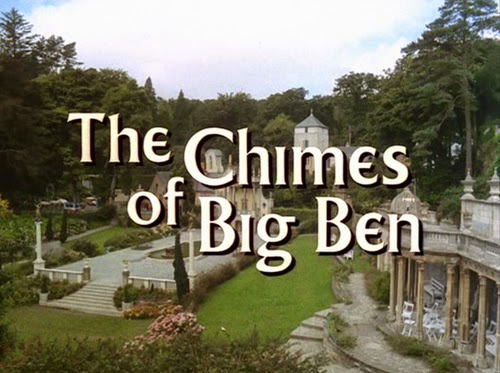 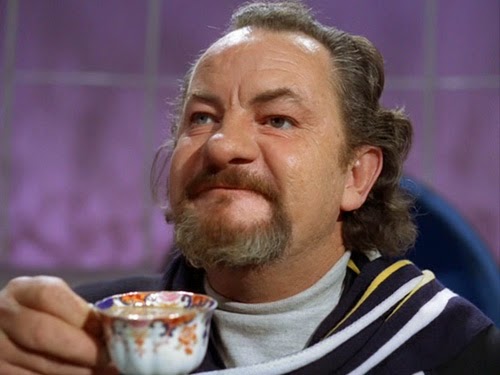 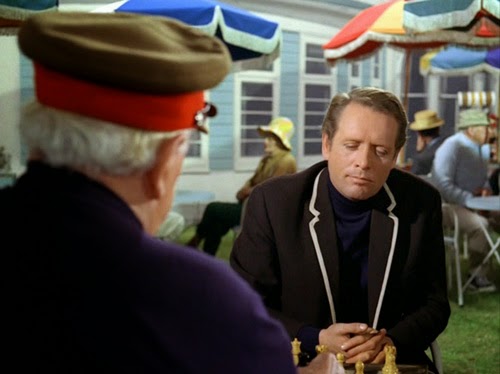 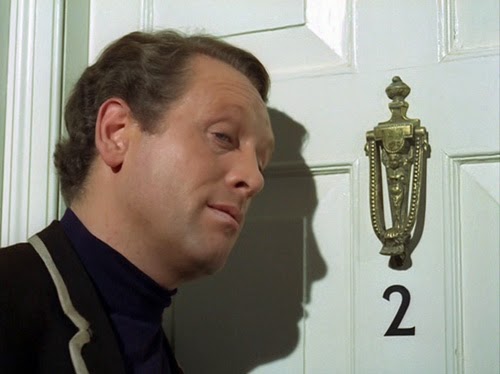 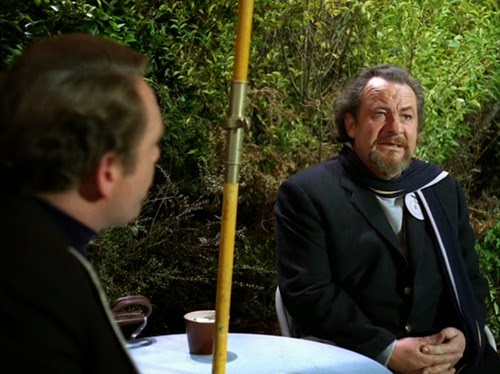 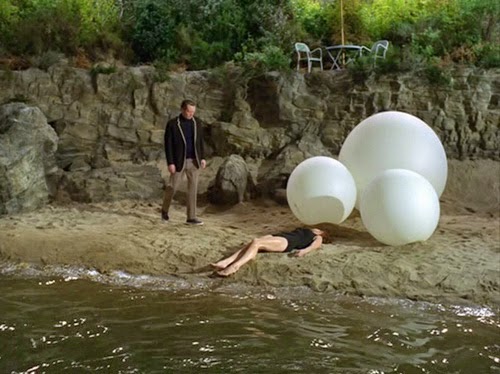 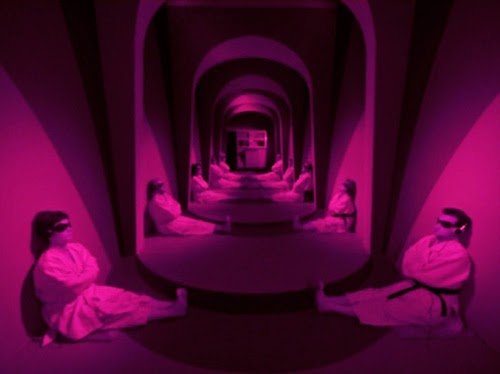 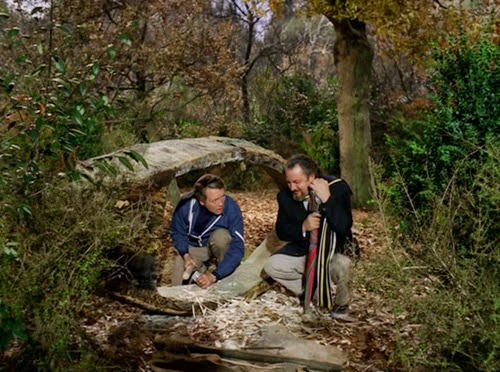 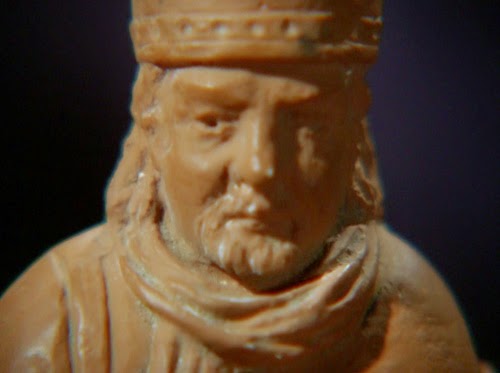 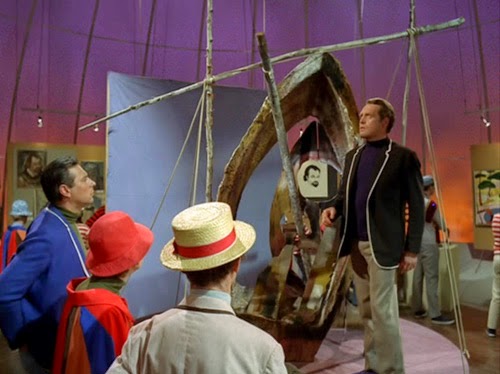 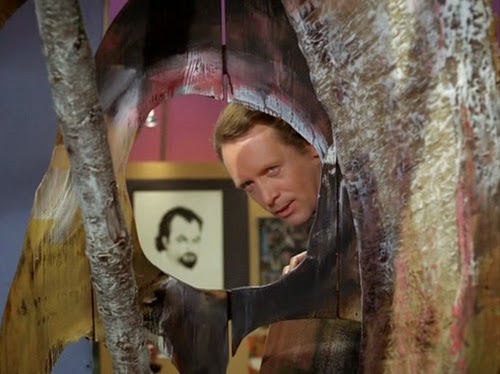 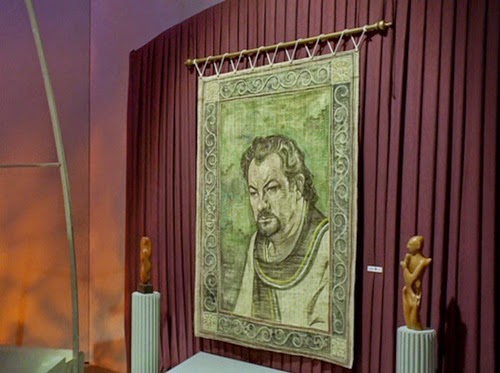 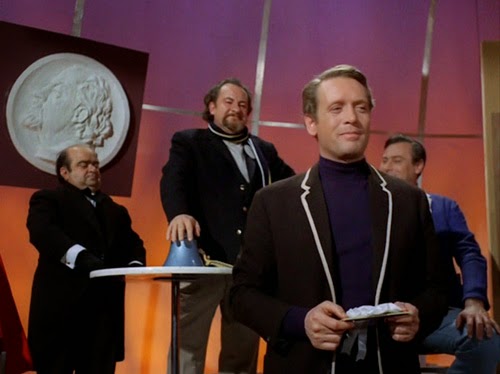 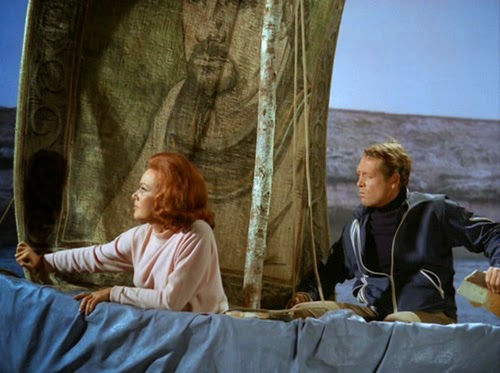 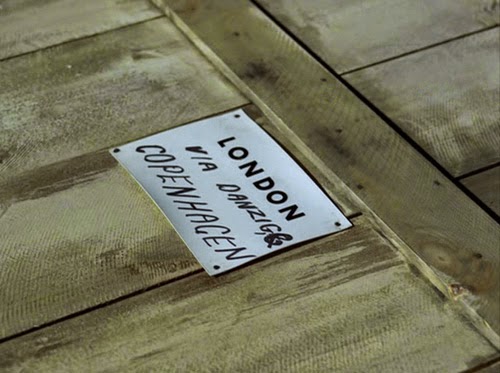 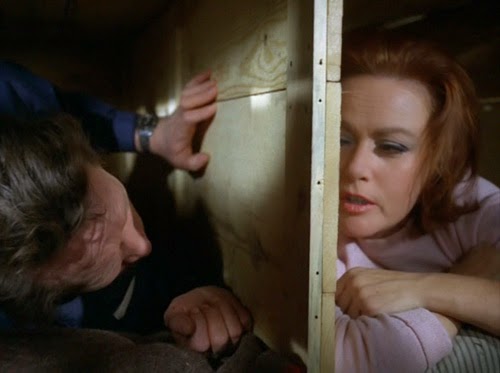 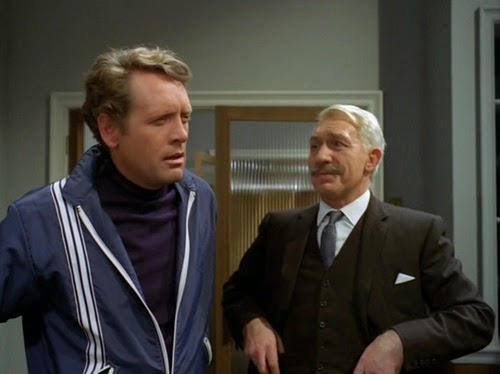 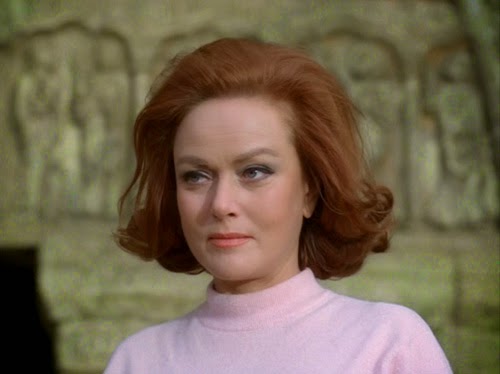 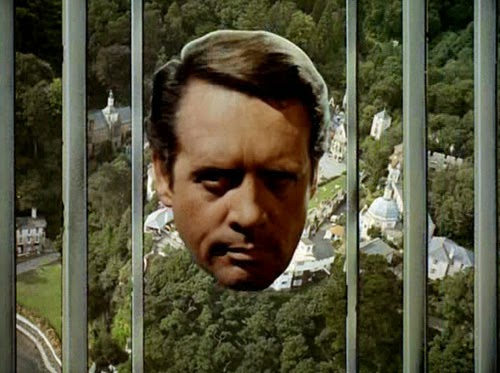