What then must we do?

The Year of Living Dangerously
(1982)

Peter Weir’s second (and most likely final) collaboration with Mel Gibson is also the last to bear his Australian heritage on its sleeve. It is a typically rich Weir film, resonating through performance and thematic content. But it could not really be charged as attempting to present a historical account of events in Jakarta during 1965; its preoccupations are less to do with specifics and more with the human condition (be it themes of western responsibility, personal morality, career versus ambition or fantasy versus reality).

While Weir has continued to find inspiration in history, this story  – ostensibly of a love affair between an Australian journalist (Gibson) and a British Embassy official (Sigourney Weaver) – is very much a character piece where the events of the Indonesian coup of 1965 form the backdrop. While Weir is concerned with such issues as western interference and voyeuristic distance, he does not appear interested in providing a history lesson outlining Indonesia’s past and (within its setting) present.

To some extent, this could be any (Third World or Developing) country undergoing political upheaval. Year does not have the specificity of, say, Oliver Stone’s Salvador. It is possible that Weir had this in mind when he bought the rights to Christopher Koch’s novel (Koch was involved with the screenplay at an early stage); the confusion over who is on whose side, and just what exactly is going on (journalists scrabbling about for any quote, or left with a story containing little of consequence), is part and parcel of the murky territory of that period. The official story is the one endorsed by President Suharto, the Major General who took power from Sukano following the coup attempt (and who ruled until 1998); that it was led by the PKI (the communist party).

The heart of the film lies with the diminutive Billy Kwan (Linda Hunt), a photographer who “adopts’ Gibson’s Guy Hamilton (no, not the Bond director) and invests in him all his hopes and aspirations for making a difference. Billy has high moral standards, particularly in contrast to the cynicism, indifference or career tourism of his fellow journalists. But his is a deeply flawed conscience. Weir invites us directly to identify with Billy; it is his voiceover that engages us at the outset and introduces us to Hamilton.

And it is he who introduces the viewer to the puppet master concept as a means of understanding the system of rule in Indonesia. Yet our appreciation of this idea comes through Billy’s attempts to control and manipulate the players (Guy, Weaver’s Jill Bryant). Increasingly we see that, for all his huge heart (adopting a local mother and child) and poetic soul, Billy is a fantasist with a fastidiously developed interior world; one that follows from his much-mocked physical aspect (which also denies him the world of love and pleasure). He keeps files on his friends (not, as Guy suggests, because he is a spy, but because of his would-be controlling personality) and engineers the love affair between Guy and Jill (who once spurned him). It is when reality refuses to comply with his intent (Guy putting his career first, the fate of his adopted child) that his careful, reserved persona spirals out of control (“I created you!” he implores Guy).

Gibson’s ambitious journo is straightforward in comparison; he learns his values the hard way (it’s a physical beating that guides him back toward Billy’s plans) and lacks the insight that comes through experience (“Think of me Guy, when you are sitting in some nice café in Europe”, Kumar tells him, his own fate in great doubt). Nevertheless, he is much more fully fleshed-out than Weaver’s character. Despite struggling with an English accent, she gives Jill far more substance than there is on the page. You could never accuse Weaver of taking “pretty girlfriend” parts, but she is at her most striking here. I’m not sure I completely buy into Jill’s romance with Guy, but that’s more an afterthought; Weir creates such an immersive environment that you are fully engaged by their relationship while simultaneously conscious that it is a heightened, subjective experience (the scene where they are caught in a downpour and escape to the shelter of Guy’s car, or the tense sequence where they break through a roadblock, their nervous relief enforced by the triumphant synths of Vangelis’ L’Enfant).

Indeed, it is this worldbuilding that is Weir’s greatest signature; throughout his career, and no matter how apparently contrasting the setting, you believe fully in the environment he explores. And so, here, you feel that palpable danger and unease; the heightened world of the foreign correspondent, where the big scoop takes precedence over self-preservation. Which makes it no less threatening. Michael Murphy’s cocky, crude journo is overjoyed to learn that he is being posted to Saigon (against any usual standard of commonsense); but celebrations in a local bar are curtailed when a soldier levels a pistol at him and guy; Noel Ferrier’s character is outed, meaning that he will be departing the country post-haste.

The performances all have the necessary conviction; Gibson doesn’t have long left for everyman roles at this point. It’s strange enough to see him in a suit here. Like Sean Connery, he can’t disguise his star wattage no matter the role. He was only 26 when Year came out, but has the presence of an actor 10 years older (another aspect he shares with Connery; he aged significantly during his thirties, making him a very young Vietnam vet in Lethal Weapon). His energy is always that of Mad Mel; restless, darting eyes and that open mouth, always on the verge of exasperation over the slings and arrows he faces. Gibson astutely remarked that he shared his character’s immaturity and “rough edges” (whether either ever lost them is open to debate).

Linda Hunt’s Best Supporting Actress Oscar was well-deserved. Far from being a stunt-plaudit (or, even if that was the attitude of voters, giving it to her because she played a man), Hunt is outstanding in the part. She exerts a magnetic pull on the viewer, both in her screen presence and in her precise, inviting diction. Who knows how the film would have worked if the originally cast David Atkins had remained (Weir decided the chemistry wasn’t right; he considered Bob Balaban and Wallace Shawn as possible replacements before finding Hunt).

The production wasn’t the smoothest; filming took place in the Philippines as Indonesia point blank refused permission. It then transferred to Australia after death threats against Weir and Gibson (who brushed them off; perhaps playing a tolerant character rubbed off on Mel); some thought the film would be anti-Islamic.

The film is beautifully shot by Weir regular Russell Boyd, capturing the claustrophobic humidity of the Jakarta. It would be their last collaboration until Master and Commander 21 years later (perhaps coincidentally, also Weir’s first historical setting since Year). While the main score is the work of Maurice Jarre, it is the aforementioned Vangelis who makes the most memorable contribution (in a piece that was not specifically composed for the film).

The Year of Living Dangerously represents a turning point for both Weir and Gibson. Hollywood beckoned them, albeit the former proving more discerning in his choices (even though he attached himself to another bona fide star for his first two projects there). A harbinger of this was perhaps the funding of the film, which came from MGM after the Australian financing fell out. Year may not be Weir’s most fully-rounded, wholly-satisfying film but it is certainly one of his most ambitious thematically. In that sense it departs from other ‘80s pictures depicting war reportage, such as Salvador and The Killing Fields.

If those films capture a very specific outrage, Weir is more interested in exploring the idea of the westerner as the vicarious voyeur; one who doesn’t really understand, or want to understand, the environment he encounters (and plunders). In those terms, the romantic subplot between Guy and Jill could be seen as every so slightly clumsy, as if wrested from a broader, less nuanced work. But it could also be regarded as emphasising exactly that point; ultimately the troubles of this country amount to very little, only so much as they interfere with these westerners’ privileged personal lives. 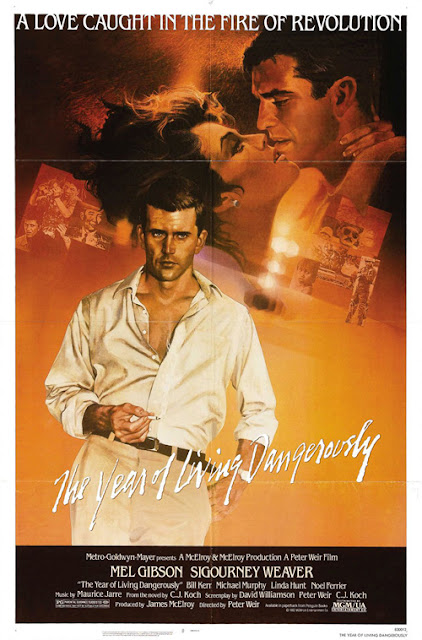