There was a great deal of confusion when the High Council were restored to power.

I can only think that Chris Boucher secretly wanted to cause Bob Holmes some grief. So he told him to put Tarrant and Dayna front and centre in his third, and least impressive, script for the series. He’s so clearly a natural for Avon and Vila that it seems like a cruel act to have him relegate them to the side lines (if, indeed, that is what happened).

As for the plot itself, it’s a mixture of the witty, the intriguing, and the banal. Like many Federation-centred stories, their characters are by far the most interesting aspect. And like other Holmes stories involving rebel movements (The Sun Makers, The Power of Kroll) Bob seems to find inspiration elusive when depicting them. It’s curious that there’s a very definite colonial vibe to the depiction of the Federation here (although the imagery is ultra-fascistic) as the rebels are almost absurdly identified as staunch Brit commandos hell-bent on knocking the stuffing out of Jerry. Certainly, that’s how Dudley Simpson sees it, with his archly military incidental music.

There’s some solid casting for the Federation types, whereas the rebel Helots make little more than a staid, stiff upper lip impression. First up is Christopher Neame (Skagra in Shada) as Colonel Quute, complete with eye patch and facial scar.

We get Nick Brimble as the General, one of those actors you think must have appeared in Doctor Who but never did.  There’s also Practor, a puppet dictator Helot. Brimble’s General represents the colonial type who has a grudging respect for the natives, their persistence and fighting tactics, in contrast to Quute’s disinterest in them.

There’s also Leitz, the aide of the mysterious Commission Sleer. Malcolm Stoddard is very good in this role and he looks a little bit like Agent Smith from The Matrix.

The interest from the Scorpio crew is in the mysterious rapid re-expansion of the Federation, and we eventually learn that the pacification of worlds is occurring by way of the influence of a drug known as Pylene-50.

While the basic idea is strong enough, the plotting and execution is very variable. Indeed, the first scene with the Scorpio crew feels rather unnatural, as if Holmes is forcing them into a Season Two story. Avon’s desire to discover what’s going on is extremely Blake-like, and this doesn’t go unnoticed.

Vila: Blake would have been proud of you, you know.
Avon: I know, but then he never was very bright.

On one level, it’s probably a good move to have the crew regain their direction but, on another, more build-up wouldn’t have gone amiss in pushing them towards such a position. The above line is after we return to the Scorpio, and Holmes makes a significant recovery in the dialogue between Avon and Vila about Tarrant leading the mission to the planet. You can’t help but think that they are accurately summarising Holmes’ view of the character.

Vila: That idiot’s looking forward to it. He can’t wait to go snooping around Helotrix.
Avon: He’s good material, is Tarrant. One of the best.

And then, with Darrow camping it up to the max:

Avon: Ah well. Tarrant is brave; young; handsome. There are three good reasons for anyone not to like him.

That this scene is the best between any of the crew in the episode wouldn’t be so bad if they weren’t all so forgettable elsewhere. Orac and Avon have a decent repartee, with Orac positioning the crew for later problems by not being arsed to work on the problem Avon has set him (of improving the ship’s boosters; he gives it to a Federation computer to sort out).

Orac: I passed the program to computers specialising in engineering design.
Avon: You mean you can’t handle it yourself?
Orac: The art of leadership is delegation.

Three episodes into the season and the limitations of the Scorpio deck compared to the Liberator’s are already being highlighted in the most demeaning way possible. Soolin and Avon sit on deck chairs in front of the seating area. Whose bright idea was that? And didn’t anyone think how silly it looked?

Holmes drops in nice little touches throughout the script, as he’s want to do. For example, the suggestion that everyone (human, presumably) comes from Earth originally, and this proves a cause for debate between Vila and Soolin.

David Sullivan Proudfoot chooses a distinctive location for the exteriors, and then blunders all over the place with the horribly fake studio “exteriors”. For a series that has made a feature of extensive outdoor work it comes as quite a shock to see Dayna and Tarrant stomping around a crappy set with a few bits of shrub to show it’s outside.

It wouldn’t matter so much if what we were seeing was engaging, but it’s mostly rather laborious. They meet up with rebel leader Hunda who announces his plan to infiltrate the Federation base and are sent on their way in their search for the drug. The appearance of Leitz is the one bright spot here, as he’s apparently working with the rebels. Then he informs the General that he’s a double agent and, right up until Servalan offs him, he’s a consistent study in self-preservation and working whoever he’s in the presence of at that time.

As I said, the best material in this story is Federation-related and Holmes’ economical but evocative exposition tells us much about what has been going on while Avon and co have been slumming it in the back of beyond. Servalan was killed in a rear-guard action at Gedden.

Practor: There was a great deal of confusion when the High Council were restored to power. Most of the Old Guard were killed in the fighting. They remained loyal to Servalan right till the end.

This means a lot appears to have happened in a very compressed period of time (unless there’s a significant period between Power and Traitor).

The stealthy way that Servalan enters this story is at odds with the implausibility of the one-time President passing herself off in a role of relative importance elsewhere in the Federation. It’s scarcely conceivable that Servalan (portrait being shown about the place liberally or not) would go unchallenged and unrecognised by most people, not just personal associates such as Practor.

That being the case, she will have to commit a lot more murders to cover her tracks. Leitz raises this with her just before he’s killed by her.

Leitz: After all, how many people’ve you killed to conceal your secret?
Servalan: You mean now? [She jabs a crystal dagger into his neck – he falls] 26. So far.

Although, drawing attention to the flaws in something doesn’t necessarily deflect attention from it. Presumably co-incidentally, this is the second episode where 26 comes up; it was also the number of victories Gunn-Sar claimed to have won over challengers.

Hunda: You’re off-worlders! Who are you?
Tarrant: You got us right the first time. We’re friends. Of anyone fighting the Federation.

I quite like the vague sense we get here that there’s no status or legend to the crew now that Blake is out of the picture. Tarrant doesn’t announce himself in any kind of defined manner, and there’s little doubt that the reaction to their presence would be entirely different if it was Blake making contact.

I’m not clear why Tarrant and Dayna have a costume change halfway through this (because it’s cold at night?) nor why the former appears to be wearing Avon’s leather hand-me-downs. Further to this, an extra appears to end up donning it at one point.

Leitz’s scheming carries a very good scene where he explains that he is a double-agent to the visibly dazed General, effectively making the latter look like someone with no authority and even less awareness of what is going on under his nose.

I suspect some may accuse him of terrible ham, but I really like Edgar Wreford’s Forbus, eccentrically presented and performed. Holmes comes up with a fairly twisted situation for him, compelled to work for Servalan in manufacturing Pylene 50.

Forbus:  It is the extract of Pamporanian fungi, it cripples and eventually kills. Death is agonizing and there is no cure. I have Pyrellic poisoning – Sleer’s doing. There is an antidote that prevents the poison spreading. As long as I take it daily I get no worse, but Sleer, of course, controls my supply.

He’s a character you could imagine Holmes featuring much more strongly in the story, and that’s part of the problem. This is almost the anti-Gambit. Holmes is buttoned-down here, and too much of the story feels like it’s written to a specific edict (much like The Power of Kroll). Who knows, maybe his abandoned Season Three script was too off-the-wall and as a result Boucher gave him an outline?

If Forbus (eventually killed by Servalan as he attempts to detonate the explosives on his person) is a highlight, then the set-bound set-to between rebels and Federation is probably the weakest sequence in the episode.

Characters unconvincingly plod about a confined space attacking each other or getting killed. It rather beggars belief that so many senior ranking Federation officers end up on manoeuvres just to get offed too.

Dayna and Tarrant leave with the necessary information on the drug; it’s been one of the least memorable episodes in terms of the crew’s involvement. Only the news that Servalan is still alive brings a spark back to their interplay, with Avon at first refusing to consider that she’s still alive and then uttering a classic final line.

Avon: All right, I believe you. I didn’t want her to die like that anyway. I need … to kill her myself.

A mixture of solid elements in respect of the Federation characters and tedious ones involving Tarrant, Dayna and the Helots. But even a Bob Holmes misfire has characters and scenes to recommend in it. 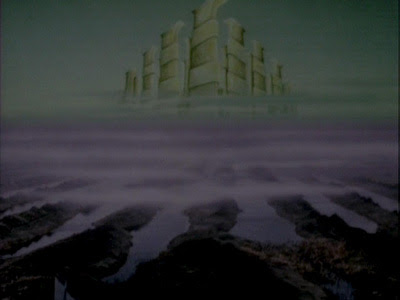 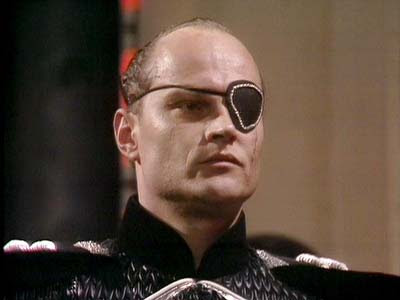 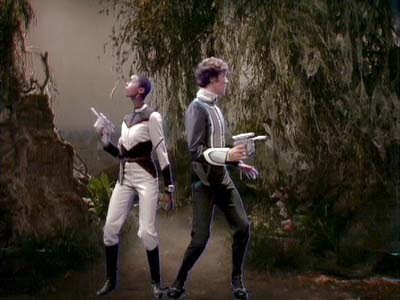 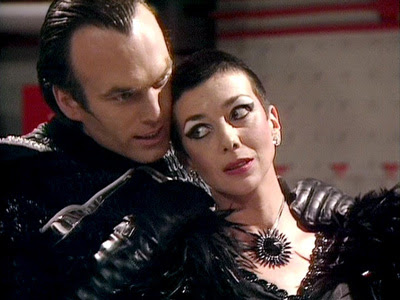 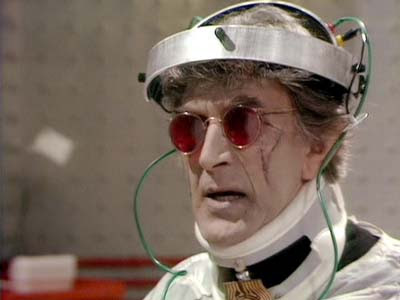