You’ve turned us all into peace puppets!

Allan Prior’s back, but it’s not all bad. His return is replete with the same lack of sense for the main characters and flair for nonsensical plot developments. However, this is relatively fast-paced and occasionally musters a moment or two of excitement (even if it feels derivative of the previous story in having another invasion of the Liberator by the Federation), putting it ahead of his efforts for the previous season. This is also Desmond McCarthy’s directorial debut, and he does okay, if unremarkable, work.

A bit brave to make Tarrant and Dayna the focus of the episode when they’ve not really been broken in as characters. Throwing them straight into a mission makes it feel a bit too much like Doctor Who having new companions who just get on with it, rather than the sense of continuation that the series has built up thus far. And while Pacey, despite the encumbrance of having visited the costume department and come out with some medieval forest-wear, can hold his own, Simon’s limitations are very apparent with line-readings all over the place.

Tarrant’s “I don’t trust anybody except myself. That’s why I’m still alive” makes him sound like a more emotive Avon.

The one-time Mr Anneke Wills, Michael Gough, plays Hower, the head honcho on Obsidian. This is a society that could only come from a writer with no mind for logic. Gough also played the Celestial Toymaker and Councillor Hedin; this is more in the latter department of get in, get out, get paid.

Hower has a robot assistant who looks like he auditioned for Woody Allen’s Sleeper. It’s a continuing peculiarity of Blake’s 7 that the design work for creatures both flesh and metal is so uniformly weak; perhaps there was some embarrassment at being called on to deliver “kiddy” work for an adult show (which would be rather shooting themselves in the foot)? Obsidian has an active volcano (just the one) and has avoided Federation occupation thus far, for reasons as yet unclear.

We learn that they are visiting the planet partly due to a rumour that Blake fetched up there (a rumour that has been made up by Servalan). It’s still not clear why Avon should want to find Blake, although holding on to this idea is understandable on the part of the production team , who need to find a reason for the fight against the Federation to continue (indeed, it is one of the story’s plus points that Servalan addresses this directly). Shouldn’t he be as happy as a pig in shit, and not want HIS ship to be re-occupied by his former leader? Or perhaps he feels an obligation to say he “tried”? It’s difficult to establish solid reasoning here, unfortunately.

With Vila asserting that something is wrong (being Prior, Vila is called on to make idiotic decisions again, although he does compensate the character in one scene), Tarrant and Dayna are sprayed down and brought before Hower and his son Bershar.

It’s an over-stacking of coincidences that Dayna’s father should have been an associate of Bershar, and Simon doesn’t exactly sell the dialogue. Hower asserts that, unlike Hal Mellanby, his group of colonists have lost faith in scientific development. Which is nonsense, as science appears to underpin the fabric of their society (he also states that they do not allow guns, but Tarrant and Dayna were just pepper-sprayed and the same weapon can be used to kill, we find out later).

Servalan, despite being President, is knocking around in a weirdly Geiger-esque spaceship with a bunch of Mutoids. This isn’t the most convincing of scenarios, and is ultimately rather reductive in terms of the series’ potential. It should be a Travis-type doing this (if anyone has to). She does have a Travis in-waiting, Mori (Ben Howard, Hinks in The Green Death), and dangles the carrot of Supreme Commander and command of the captured Liberator before him. Mori doesn’t really seem to be a fit for such an exalted role, so I like to think Servalan’s bullshitting him. Howard gives a decent performance, but he only ever seems like one of the men who made his way up in the ranks.

Talking of ranks, that nice little nugget of Vila backstory – which unfortunately can’t disguise the tendency to make him a frequent doofus. We learn that he bought his Grade Four status from a friend in the Testing Centre; he’s not stupid and didn’t want to be a Space Captain – they all ended up getting killed. Setting up his overt distrust of Tarrant is interesting too (as we would expect it to be Avon who would nurse this) – I like Avon’s “I’d be more inclined to believe that he was a Space Captain than that you could have been”. In the same scene we discover that he has a bit of a yen for Dayna, which gives us a sense that the writers may be looking to finally allow Vila to come into his own as a character.

Vila: Pretty? Yes, I suppose she is. I hadn’t really noticed.
Avon: We’ve seen you not really noticing. Frequently.

Perhaps Vila doesn’t like Tarrant because he sees the young studly as a threat to his designs on Dayna? Likely, he just doesn’t like his blue-eyed wholesome proficiency.

Tarrant mooting the possibility of using Obsidian as a home base didn’t really convince me, and I still wonder if that wasn’t something of a cover story. We know that it represents a strategic target for the Federation, so even if the Pyroans said yes, there’d still be the issue of it being too likely to come under Federation scrutiny and the ship being discovered. It’s interesting how the idea of a home base comes up every so often but never becomes concrete until Season Four. Could the Liberator even land on a planet? I’ve always thought of it as like the Enterprise, entirely space-bound.

Servalan wastes no time in killing a couple of Pyroans who bring her a message – she’s not very calculated in this story, seeming to not give much of a toss about having to drastically change her plans or commit grand carnage and thus lose her objectives.

There’s a weird effect of the Pyroans fading in and out of sight as they come to meet Servalan – I’m not sure why. Also a slight déjà-vu of the Mentiads from The Pirate Planet in these sequences; fortunately McCarthy has a slightly better eye for composition than Pennant Roberts.

Hower: My son, like the rest of us, hates war, conflict, aggression.
Dayna: Who doesn’t?

Er, you Dayna, on the slay-happy evidence of the last two episodes. As for the Pyroans collectively “hating” violence, that sounds like a rather extreme position to hold – clumsy dialogue from Prior. The Pyroans have been taught peace from the cradle, and have blocked with minute electric shocks every tendency towards aggressive acts in combination with daily psychological propaganda. All sounds a bit half-arsed, really. And by the end of the episode it’s clear that either none of this works, or hasn’t been properly thought out by Prior.

It’s left to Avon to teleport down, suss out that the Federation are there, and teleport up again (Servalan likewise doesn’t spend long on the surface).

Meanwhile, Tarrant’s attempt to strike a deal with Bershar reveals that he’s been in contact with Servalan, and delivering them to the Federation (although he ends up keeping them captive, with Mori and his troops gaining possession of the teleport bracelets).

This isn’t a good episode for Cally’s telepathy, as everyone repeatedly ignores her or she can’t establish contact at the right time. So Vila doesn’t listen to her spidey-sense and teleports up the Federation troops. The effectiveness of this is diminished somewhat by just how stylishly Powerplay used this idea, but it’s way ahead of the cack-handed presence of Travis on the ship in Voice from the Past.

It’s a good tension-builder having Avon conversing with Zen, blithely unaware of the invasion of the ship. And then the danger is compounded by an attack by the Battle Fleet.

Alan Bowerman doesn’t make the most convincing of Commanders, and seems a slightly odd casting choice (he certainly doesn’t seem to have a regulation haircut).

Although Avon succeeds in blowing up a couple of Federation pursuit ships, we have the usual Prior situation of having to make characters act stupidly to progress the plot. So Avon repeatedly ignores Cally’s telepathic warnings. He redeems himself somewhat by giving Zen an order to fire (taking out three more ships), then managing to shoot down a couple of troops before getting shot himself (in the arm).

But why does Mori leave with Orac and Cally rather than holding his ground on the ship (Vila operates the teleport, against Cally’s wishes)? This is exactly the same stupidity that Travis showed in Voice from the Past. Orac is given some engagingly prickly dialogue in his scenes with Mori.

Vila gets to chat irreverently to Servalan for the second time in as many episodes; they’ve got quite a repartee going now. He then has an amusingly intoxicated scene with Avon.

Vila: You did very well, I must say.
Avon: Must you?
Vila: Here, go on. Adrenalin and soma. It’s most relaxing.
Avon: No thanks. I need my wits about me.
Vila: If you say so.

Servalan now seems to have decided that without Blake the Liberator is no immediate threat, since the crew have no political ambitions.

Since she knew this at the start of the episode, she’s been prating about all this time for no good reason – she should have been pre-occupied with securing her likely slender grip on the presidency.

Silliest line of the episode goes to Bershar. Confronted by his father, he accuses Hower; “You’ve turned us all into peace puppets!”

Hower’s reaction, having his manbot shoot Bershar dead, is a bit on the violent, non-peaceful side. Maybe that is intended ironically by Prior, but it just underlines what a daft premise he’s come up with.

The revelation that there is a nuclear device installed deep in the heart of the planet is presumably also an ironic commentary on willingness to use violence to uphold peace. For whatever reason, we never learn why the Pyroans are dying slowly (I suspect Prior hadn’t worked it out). I have a bit of trouble believing that they were left alone on account of the threat of their Doomsday Weapon. Far more likely, the Federation would have called their bluff rather than allow active rebellion (much as Servalan does at the end of this episode). Her spur of the moment decision to order the destruction of the Liberator shows that inconsistency is her only consistency in this story.

I’d assumed that Orac was lying when he told Mori of the Liberator’s attack weaknesses but presumably the little blighter actually did sell out the ship. If it was a bluff, then it isn’t verified.

Cally finally uses her telepathy effectively in order to help Tarrant and Dayna dispatch the remaining troopers (Mori who gets an echoing cry as he falls into the lava). All that’s left is for Hower to make contact (he calls them “My friends” which doesn’t really sound right) and tell them that his people are going to carry out their sacred vow; they blow the planet up. Well that’s that, then.

Nothing fancy, then: downright stupid in places. But mostly fairly watchable, even if it’s mystifying why Boucher keeps commissioning Prior. 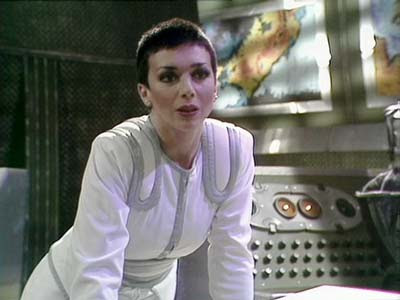 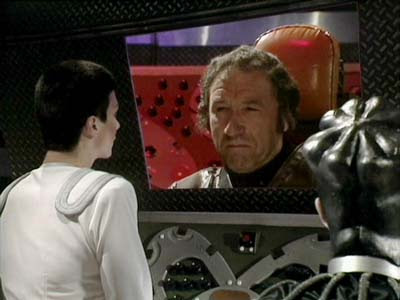 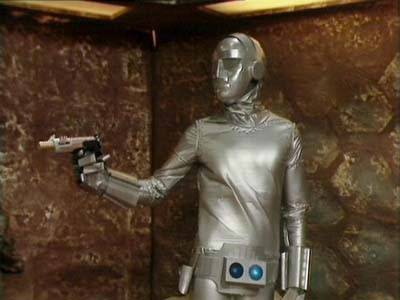 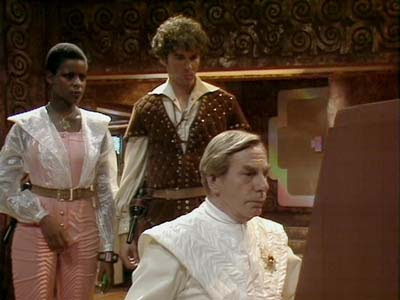 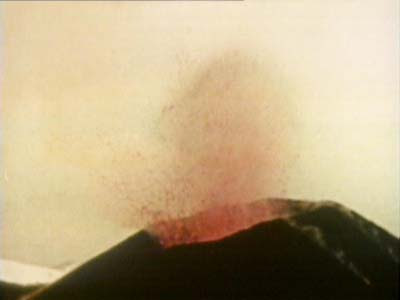