You have a reputation for straightforward villainy that’s second to none.

After three episodes delivering variations on “It’s so bad, it’s good”, Season Three finally pays off on the promise of the first couple of stories. This is Chris Boucher’s first of the run, and like any good script editor he focuses on areas that other writers would be unlikely to consider. The “area” in this episode is the much misused character of Vila, and you have to wonder if he hadn’t made a mental note that there’d been far too much “Vila the idiot” creeping in. Certainly, this redresses the balance. Perhaps Keating had been whispering for a while that he’d like a Vila-centric episode too (edit: apparently Keating had suggested this to Boucher).

It also helps that Boucher chooses a plotline that takes advantage of the more expansive universe of Season Three, since there’s a feeling of unpredictability here. An ancient city with mysteries to unlock may echo Death to the Daleks, but this doesn’t feel derivative.

Part of that may be the distracting element of Colin Baker slicing up the ham and spitting it over every corner of the screen as Bayban the Beserker/Butcher. Baker’s performance really isn’t that far from the preening self-importance of the Sixth Doctor and, if the leather gear and earring suggest that Colin’s been miscast, Boucher’s dialogue is never less than certain that they’ve picked the right actor for the role. Indeed, he’s one of the episode’s most enjoyable excesses.

Far better used than the rather redundant Black Guardian (Valentine Dyall as Norl), who gives good vocal gravitas but has rather a one-note role.

Every so often the series so completely nails an opening scene on the Liberator that you’re slightly sad to have the story proper begin. This is one such, with Tarrant the tool coming over all schoolyard bully with poor Vila. He even hits him in their first minute of screen time. This is the production team still trying to figure out what to do with the character. Last week’s space jock is this week’s simpering wanker. He’s more in line with his portrayal in Dawn of the Gods here, actually. A bit of a jerk to everyone, with designs on leadership. Vila as much as says he’s being treated like he was in the playground.

Vila: All my life, as long as I can remember, there’s been people like you.
Tarrant: And I thought I was unique.
Vila: You’re not even unusual.

Vila’s quite right to say he was on the ship first, but Tarrant barracks him into doing his bidding; he has to help some people on a planet in exchange for crystals for the Liberator’s weapons (a feeble MacGuffin, but that’s not so important). It never becomes clear just how Tarrant made contact, probably because Boucher knew that it would be difficult to answer that one.

Boucher does pay attention to internal logic in terms of Vila going off on his own, though; Avon’s attempt to get to him to carry a tracer doesn’t work because, no doubt as it was at Federation school, he doesn’t trust the bullies.

Ironically, but fittingly, Avon lays down the law with Tarrant, threatening to kill him. If anyone’s going to mistreat Vila it’s going to be him. After all, they have a special rapport. Asked why so protective, he responds.

Avon: He’s irritating, but he’s useful. We can easily replace a pilot, but a talented thief is rare.

Boucher’s generous with his lines all-round in this episode, though. Cally and Dayna don’t have very large roles, but their lines are mostly quite good. Asked, in reference to the Liberator, if she likes being helpless, she tells Tarrant, “I don’t know. I’ve never tried it.” Although I never much liked Cally when I first saw the series, she can be a decent character – and Chappelle engaging – on the occasions where the writers make a bit of effort with her.

The promised crystals turn out to be a booby-trapped box, so Avon and Cally go down to look for Vila (leaving a sulky Tarrant on the ship, where Dayna has no sympathy for him).

Vere Lorrimer’s the most frequent director of the series (which may explain his eventual producership) and never the most stylish. But his work ranges from can’t be arsed to entirely competent. This is definitely in the latter camp. He’s helped by some decent interior sets in the titular city (and appears to borrow George Spenton-Fosters “light it in different colours to indicate different places that use the same set” trick from Pressure Point).

Keating is great with the nervous/insulting lines written for him; calculating that he can get away with rudeness as he represents an asset. And he definitely has chemistry with Carol Hawkins playing Kerril, one of Bayban’s crew. Although the latter’s withdrawal into girlishness once she puts on a dress is a bit difficult to swallow.

Kerril: Lost your nerve?
Vila: That’s right. Pity I didn’t lose my sense of smell as well.
Kerril: What’s that supposed to mean?
Vila: You should try taking a bath sometime. You smell terrible.

Colin Baker is thrown a whole kitchen sink of OTT lines to wolf down, and you can see he’s enjoying his feast. He’s also well-aided by that reliable player of sidekicks, John J Carney as Shem (Bloodaxe in The Time Warrior). Boucher gives Bayban the Blusterer the most ridiculous lines he can think of to make him the ultimate caricature of would-be villainy.

Bayban: It’s an honour, sir.
Vila: The honour is mine.
Bayban: That’s what I meant.

The dialogue in this episode is probably its greatest joy, although there’s a fair bit of dexterous plotting on Boucher’s part too. On being Number Two to Blake on the Federation’s most wanted list:

Bayban: I was working my way up that list before he crept out of his crèche.

The contempt for Blake’s “criminality” gives us an irreverent window on the exploits we’ve been watching for the past few seasons. Bayban “didn’t take any political shortcuts” to get where he is.

Vila: You have a reputation for straightforward villainy that’s second to none.

Norl’s cryptic explanation that behind the door Bayban wants Vila to unlock there is “this world and the next” sets up the mystery to solve, but it also emphasises an increasingly metaphysical bent in this season (“religious mumbo-jumbo” as Bayban calls it).

A solid amount of time is given to Vila being portrayed as a craftsmen, referring to the designer he’s up against as his opponent, and Boucher has worked out his theory of force fields convincingly, such that it doesn’t appear to have any logic holes in it (I’m not so sure about the later suggestion that air can get through a force field, though – who knows?)

Bayban recounting his relationship with his mother is particularly amusing

Avon and Cally also have some nice banter, looking for Vila.

Avon: It’s a pity we aren’t all as reliable as Zen.
Cally: But I thought you were.

It’s an effective additional layer to learn that Norl, whom we thought of as a hostage, is actually intent on Bayban succeeding in breaking through the door.

Sherm: You’ve 25 minutes left.
Vila: Who told you that?
Sherm: Captain Bayban.
Vila: I didn’t think you could have worked it out yourself.

It might be suggested that Avon could be given exactly the same lines, also to humorous effect. And that’s true. It’s all in the delivery, but there’s an edge in giving them to Vila because he’s only willing to be so insulting because he knows he’s indispensible.

It’s rather touching when Kerril appears all dolled-up, and Boucher times Vila being disarmed by her as the force field giving way effectively.

The transportation to the star ship is achieved via a visual that looks a bit like something out of the Tegan’s mind sequences in Kinda.

A great raft of exposition threatens to swallow us at this point, but Boucher’s set up an intriguing puzzle for an intelligent man to solve (Vila). It’s lucky for him that the star ship has landed or he and Kerril would have suffocated. But I suspect they would still have canoodled before they expired.

Tarrant’s such a legend that he’s actually met Bayban before. To be fair to Pacey, he’s not afraid to play the character as a complete cock. Everyone leaves Orac to operate the teleport, and there’s much despatching of Bayban’s men (including a remote controlled bomb courtesy of Dayna – Boucher trying to keep a grip on the skills set up in Aftermath with this and the gun she gave Cally earlier). Eventually they discover Bayban, intent on using his massive laser on the doorway.

Cally: You’d have to be insane to use it.
Bayban: Maybe that’s it. Maybe I am insane.

What did I say about Lorrimer doing a good job? He feels no inclination to make the planet Vila and Kerril find themselves on remotely convincing. For a start, it appears to have no atmosphere and consist of a couple of houseplants and a foot spa.

Oh, and exactly the crystals the Liberator needs to power its lasers. But there’s a certain knowing fun in the corniness of this development, and Kerril’s upset that Vila won’t be sharing Home/Vilaworld with her even gives them their first (and only) fight. The playing and writing of this really is quite sweet, and works far better than it has any right to.

Cally: Vila, we thought we’d lost you.
Avon: But every silver lining has a cloud.
Vila: I’d say you got it wrong, except I know you didn’t.

All very well written and performed, Avon’s disdain betraying that he’s quite pleased to see him and Tarrant’s meal of saying how happy he is to see him being dismissively acknowledged by Vila. As noted earlier, Dyall’s thrown a load of slightly unnecessary exposition at this point (we’ve already got the gist of it).

Boucher makes the climax both neat and satisfying; Bayban returns to wreak laser carnage, but all he does is destroy a dead city, its inhabitants (and Keril) already transported to a new world.

And Vila, having decided not to go there with Kerril but teleporting away in the nick of time, allows despondency turn to perverse hope after a heart-to-heart with Orac.

Vila: I think I’ve just made the biggest mistake of my life.
Orac: In the light of your previous record, that seems unlikely. I would predict that there are far greater mistakes waiting to be made by someone with your obvious talent for them.
Vila: Shut up, Orac. Still, it’s a comforting thought. Let’s hope they’ve all got good legs.

The increasing tendency to attempt to raise a smile in the last scene has mixed results; in general, I preferred the attempts to finish on food for thought or conflict in the first season. But here it’s entirely appropriate to the episode, in a bittersweet way.

A magnificent return to form for the series in an episode that effectively combines broad comedy, intrigue and romance. And makes Michael Keating the star player. One of the “Do you remember the one where…?” episodes, but in this case the “legend” is justified. 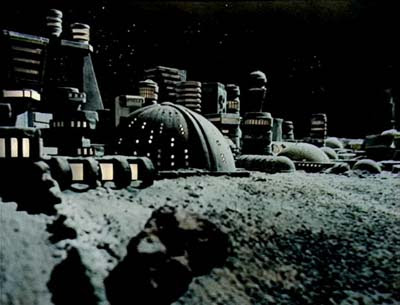 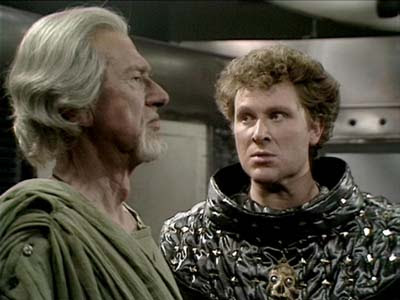 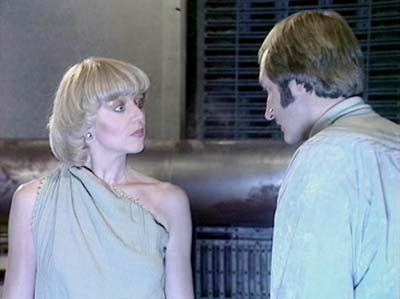 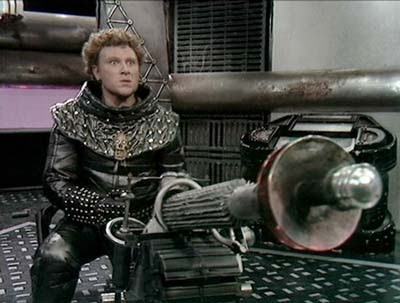 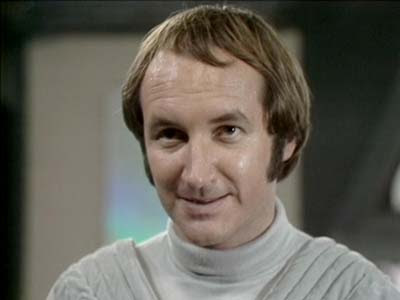