You fight well. But you’re still a woman.

There’s something so awesomely shit about Harvest of Kairos, I have to wonder how much of it is intentional and how much is Ben Steed just being a straight-up terrible writer. Whether it’s Jarvik – hands on hips – extolling the virtues of manliness, the Liberator crew being made fools of and getting boarded (again), Tarrant flying a lunar landing module or Servalan acting like a completed idiot (the odd line aside) the script is as holey as a Swiss cheese. And that’s even without the terrifying insects menacing Dayna. But… In its favour Avon spends a whole episode fascinated by a rock, completely disinterested in Tarrant’s bout of piracy. Perhaps Chris Boucher was suffering from Space Madness when he commissioned this?

Beginning with a conversation between Tarrant (wearing a shell suit) and Dayna makes this rather hard work from the off; brash meets plankish. Tarrant’s characterisation in this one is peculiar; he’s made very much the Blake-like protagonist, both in being presented with a battle of wits against an old colleague and in the way that Servalan treats him as if she’s known of him and his abilities for years. Pacey undercuts this to some extent (you’d never see Blake punching the air with glee), and it almost works set against Avon’s aloofness to macho goings-on around him.

Talking of whom, Avon and Vila are visiting a planet while the Liberator is under threat from, yes, Servalan (who is supported by stooge Dastor – Frank Gatliff, Ortron in The Monster of Peladon).

But didn’t Servalan announce that she couldn’t be arsed with the Liberator for the time being in Volcano? What’s changed? She’s not restored order throughout the Federation. The poor use of her character is beginning to become rather de rigueur. In this episode she often comes across as weak, or even stupid.

Her reaction to being told that a construction worker has been mocking her failure to deal with Tarrant (and why is it all about Tarrant? It makes him sound like he’s the new leader of the crew) isn’t to have him ejected into space (as would likely have happened in Season One) but to indulge him, allow him to undermine her in front of her inferiors, and then to apparently get all moist for his maximum beefcake. On one level this is quite funny, but it’s utterly incoherent in terms of character. Particularly if we are to try and believe that the President is intending to maintain any grip on her power.

I don’t think Andrew Burt (Vanguard in Terminus) is taking Jarvik especially seriously, but I don’t blame him given the dialogue; he’s almost Pex-like (Paradise Towers) in his over-brawn (“Woman, you are beautiful”, he announces to Servalan before informing her that she doesn’t know Tarrant; “He’s a man. He thinks and acts like a man. Not a machine”). Out of this insight into the male psyche, Jarvik miraculously intuits that Tarrant is headed for Kairos.  If I was to be generous, I’d say that Steed may be positioning Avon (who spends his time thinking and acting like a machine) in the real heroic role here, as it is his insight into the properties of Sopron that ultimately enables the crew to regain the Liberator.

Yes, Avon has retrieved a silicon-based rock/life form with unusual properties. Avon’s all-encompassing interest in Sopron is most amusing, delaying Tarrant from retaliating against the Federation threat by asking Zen to analyse it (“You can carry on now”, he tells Tarrant). If it wasn’t for his acid wit surfacing every so often, you’d think he’d switched characters with a batty old professor, oblivious to the world outside of his science experiments.

The evasion of the Federation is quite effective, but in terms of Jarvik’s staged attack lulling the crew into a false sense of security (so that Tarrant thinks he can carry out his plan to rob the Federation of Kairopan), we’ve been here before with Travis and Project Avalon.

We learn that no one who has ventured on Kairos outside of the seven day harvest period has lived to tell. This is frankly ludicrous. A planet at “the heart of Federation space” and nobody’s left a video monitor to record what transpires? Or sent one of those shitbots from Season One to check out the real story?

Jarvik tells Servalan that “Tarrant delights in doing things people think he can’t”. He’s quite a guy. Eric Saward must have seen this episode, as I can just hear Davison asking the Cyberleader, “When did you last feel the warmth of the sun on your naked back?” Jarvik boasts he could take Tarrant down with just one ship. At least he’s such a massive cock that you’re engaged enough to want to see what will happen. Servalan gets a redeeming line of dialogue relating to Jarvik’s impertinent kissing of her earlier (this after battering a couple of guards – none of which saw him disciplined.)

Servalan: But first, there is the question of that degrading and primitive act to which I was subjected in the control room. I should like you to do it again.

Kairos looks like a Welsh field. Which it probably is, so it doesn’t make for a very exotic locale. The callousness of the Federation is highlighted here (although, to be fair, Captain Shad Thames – Anthony Gardner, from The Macra Terror – seems to be thinking about dumping some of the crop rather than the pickers) as Servalan gives the order to leave the labourers behind. A nice touch that the shuttle takes off without one of the guards who has just been beating on them.

“Bit of a know-all, aren’t’ you”, asks Vila of know-all Tarrant. And gets a cheesy smile in reply. Tarrant’s doing his best to become a bit of an irritating tit. Which kind of fits with Ultra-man Jarvik, pushing Servalan onto a couch and telling her, “Sit down and shut up”.

Maybe Ben Steed is right, and Servalan has secretly always wanted to be dominated by a man with an enormous cock. I didn’t really get that impression of her before now, though.

Avon indirectly causes the Liberator to be shot in the arse, as he has requisitioned Cally to communicate with Sopron. Tarrant accuses him of allowing the Sopron to warp his reasoning.

Avon: I understand that this ship is the most powerful in the galaxy and that you are the most astute space warfare commander…. Or so you keep telling us.

So that’s the third time this season the Liberator has been captured by the Federation. In only five episodes. Despite its ebbing power. Perhaps it’s a sign of the times; even Blake wasn’t immune at the tail-end of Season Two. It’s a nice touch that we don’t see the take-over, rather we learn that it has taken place by fact of Captain Shad Thames teleporting to Servalan’s base.

The shuttle guards are about as convincing as the Vardans in The Invasion of Time. Appropriate, since Gerald Blake directed both stories. Although I quite like Blake’s work on Invasion, there’s not a lot to distinguish it here.

Servalan addressing Tarrant just seems wrong when she arrives on the Liberator. She’s said bugger-all to him before now. She played tonsil hockey with Avon a couple of weeks back but he’s left playing Number Two? Fortunately, he eventually turns the tables, kind of, by ensuring that Zen only obeys her commands after she has teleported the crew down to a planet with a breathable atmosphere. Which is Kairos. Oops! Still, Avon’s had Sopron on his mind.

Down on the surface, Avon heads off alone (“I’ll work out my own salvation”) and discovers a proto-space age landing module.

There’s no good reason for this to be here. But we’ve just had an episode featuring a golf buggy with teeth, so nothing is too surprising by this point.

Servalan couldn’t let it lie, as Steed has written the story into a corner and he needs a way for the crew to escape. At least vaguely legitimately. Which this isn’t. So she bizarrely requests that Jarvik proves himself by confronting Tarrant face-to-face, retrieving the crew’s bracelets. And because he’s all-man he agrees.

The craptastic giant insect beggars belief. The designers on this show really can’t do creatures, can they?

And then Dayna finds herself about to be killed by one (they’ll devour anyone who smells of Kairopan), is saved by Tarrant, who then has to fight Jarvik, who wins and then fights Dayna, who is doing pretty well until Jarvik teleports her back to the Liberator.

There’s a studious ineptitude to this sequence. Only the no-less-bizarre Avon plotline holds out any hope. There must be some reason he’s so into this bloody rock.

Avon: This happens to be the most sophisticated life form it has ever been my pleasure to come across, present company not excepted.

The solution is to cram aboard the lunar module and set off for the Liberator (narrowly avoiding Servalan strafing this area of the planet). Luckily for them, Sopron is revealed to be a “distorting mirror” and Avon has managed to build an artificial Sopron into the module (don’t ask how).

Previously, Zen, Orac and Cally all came up with different ideas of what it was and now Zen describes the module as a craft with assault capabilities greater than the Liberator.

I like the essential idea of this, but I’m with Jarvik when he bursts into hysterics, not remotely believing that the image of the module corresponds to Zen’s description. Yet President Servalan believes it. Presumably because they need someone to act as much of an idiot as Travis used to, now he’s gone.

Tarrant: He was a special sort of man.
Avon: Spare us the eulogy. He was a Federation thug.
Tarrant: No. No, that isn’t what he was.

Tarrant’s right, he wasn’t a thug. He was a demented caricature of masculine prowess. But I’m not sure to what end. 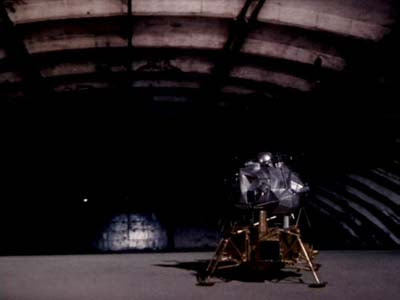 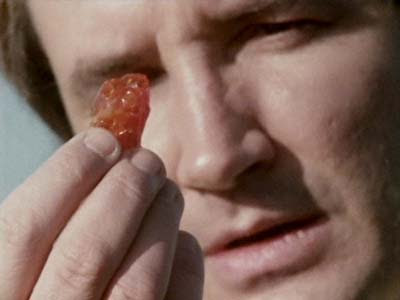 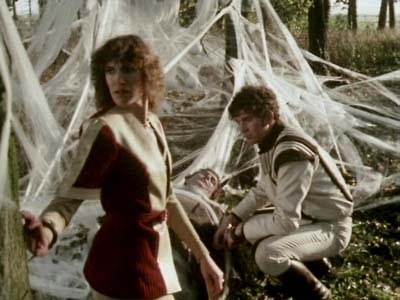 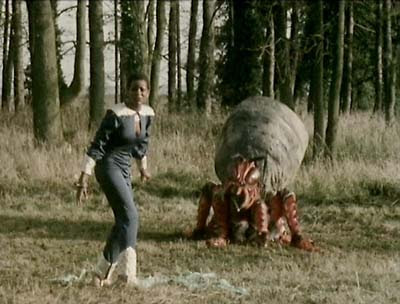 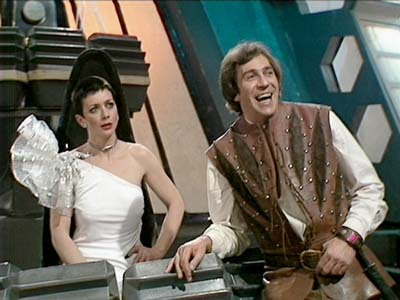