Unfortunately I misjudged you, you are just a stupid policeman… Whose luck has run out.

The early Connery films tended to be viewed as something of a sacred benchmark for what the series should aspire to, existing in a purified state before complete formula set in. But the first film, based on the sixth Bond novel, is very much finding its feet. Whilst the plot mechanics of the first half wouldn’t look out of place in any classic spy movie of the era (and, as such, relate quite fluidly to the content of the next Bond movie), the later stages establish the series’ template of a larger-than-life, crippled villain and grandiose set pieces.

I’ll readily admit that I find the earlier sections of the film much more engrossing than anything we see once the titular character is introduced. It may have provided a firm foundation for the likes of the Flint series, and later Austin Powers, but in context we see a pronounced shift from relatively localised, down-to-earth interactions to cartoonish, world domination antics. The Bond films can take in many different styles approaches to narrative but attempting them within the same film can be jarring.

The premise finds Bond called upon to investigate Jamaicans (it seems) interfering with Cape Canaveral rockets, but the larger canvas is almost incidental to the personal interactions of Bond. We first see him, iconically, at a game of baccarat. Except we don’t, initially. He’s introduced from behind, as the victor, and the announcement of his identity sets the standard for later films. Other examples of this in the early scenes include his flirtation with Moneypenny, throwing his hat onto a hat stand, his use of a Beretta versus a Walther PPK, his slightly insubordinate relationship with M. It all looks so easy and well-established, with the benefit of 50 years hindsight.

Once he’s in Jamaica (and a hallmark of the early films is a lack of frenzied location-hopping, something that allows the characters and story beats to breathe more easily) we see other soon-to-be standards. The local sidekick (Quarrel, played by John Kitzmiller) and Felix Leiter (Hawaii Five-O’s Jack Lord) appear, but the main thrust is identifying Bond’s character.

Much has been noted of the influence of Terence Young on young Connery’s more unrefined physicality, and the result is charismatic mixture of the urbane and brutish. Bond’s happy to stroll (or ride) into danger, getting into a car he knows wasn’t sent for him (there are two car sequences in the first half of the film, the second a more traditional chase). But the strongest character beat is his cold amorality, shooting his unarmed, would-be assassin Professor Dent (Anthony Dawson) without a second thought.

Bond: That’s a Smith and Wesson. And you’ve had your six.

If Dirty Harry became famous for a speech based on similar logic, it’s no coincidence that both characters have embedded themselves in the mass psyche as anti-heroes with no sympathy for liberal morality.

Other points to note from this section include the allying of US and British forces to oppose a fantasy threat (“You mean we’re fighting the same war?”) and the allusions to this threat as something as terrible as Hitler (“Dr. No runs the place like a concentration camp”). There is an over highlighting of Bond’s superiority to other nations and cultures throughout, and this is underlined once the plot’s more fantastical elements take hold. As the guiding rationalist, he mocks the belief of both Quarrel and Honey Rider in a dragon patrolling Crab Quay (the investigative elements of plot don’t hold up to much scrutiny; it seems unlikely that there would be any question of what was going on, who was doing it and what needed to be done to take him down). He also tells Quarrel, “Fetch my shoes”, ever the unreconstituted colonialist.

The playful first encounter with Honey (Ursula Andress) is justifiably famous. The scenery is lush and idyllic (as is Andress herself) and we’ve been primed for “Under the Mango Trees” twice already by this point. The series’ suspect attitude towards women is present and correct; not only was Honey molested when she was younger (“I scratched his face – but he was stronger than I was”) but the villain plans to allows his guards “to amuse her”). Bond’s sexism is allowed because in contrast he has a veneer of refinement. And, he doesn’t need to take what he wants because he is irresistible.

Honey: What are you doing here? Looking for shells?
Bond: I’m just looking.

Joseph Wiseman is fine as Dr. No, but the character just isn’t very interesting. Nor is his big plan. And his science, despite some  decontamination window-dressing, is highly unstable.

Bond: It was a good idea to use atomic power. I’m glad to see you can handle it properly.

It’s an amusing quip (possibly the best in the film), but somehow Bond returns to fight another day despite exposure to probably lethal doses of radiation.  No introduces a long line of crippled villains (his hands were damaged in the course of his radiation experiments) who announce their entire plan just before they have the tables turned on them.

Dr. No: I only gratify your curiosity because you’re the one man I’ve met capable of appreciating what I have done. And keeping it to himself.

It also fans the idea of Bond as an exemplar of cultured manliness; even geniuses respect him. The desire of the producers not to fan less savoury prospects (of power bloc antagonism) results in the series latching onto an interesting identifier.

Dr. No: East, West, just points of the compass. Each as stupid as each other.

The Doctor is a member of SPECTRE (the bizarrely named Special Executive for Counter-Intelligence, Terrorism, Revenge (!), Extortion) but his philosophy could mark him out as your average multi-national.

The dinner with the No is mildly enjoyable, but it doesn’t really have much bite to it. After which we have what will become par for the course; Bond escaping and blowing up Ken Adam’s expensive set (which requires him to overload the reactor). The final scene is also de rigueur Bond; he’s in flagrante with Honey. While Bond is clearly finding its feet with the humour elsewhere, the ending could have been placed in any of the series.

Dr. No scores highly in many respects, most especially in Terence Young’s direction, Peter Hunt’s dynamic editing (he would cut on action, not generally a “done thing” at that point) and John Barry’s score, as a script it is less satisfying once it finds its absolute rotter. It would only take one more film to firmly for the series to firmly finding its footing. 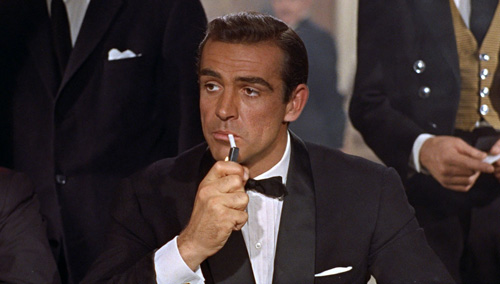 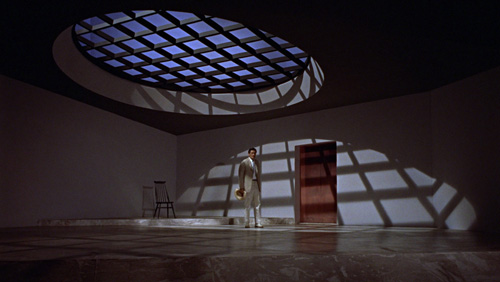 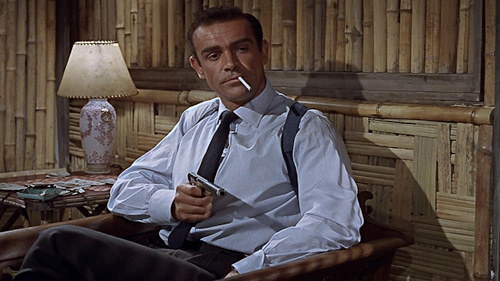 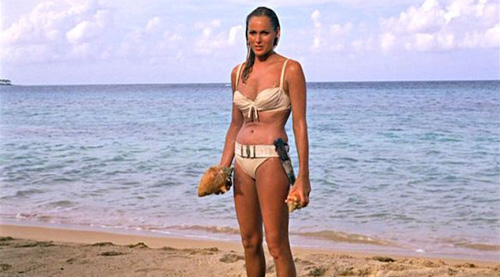 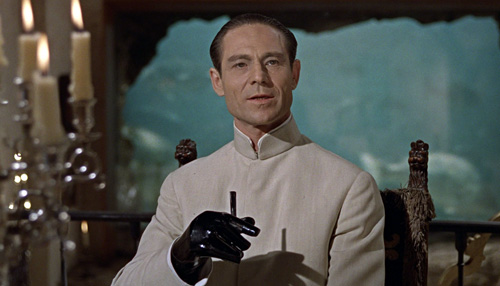