As you can see, I am about to inaugurate a little war.

Thunderball marked a shift in approach for the Bond series. Plots now appeared to be structured around how much money was available, with the overriding ditctat of putting it all up there on screen. From action sequences to set design, the films relied on being able to announce, “The biggest yet”. Despite this, the jet-setting of the series remained limited. The previous film was located mainly in the Bahamas, and this one would set up shop in Japan.

Connery, quite understandably, had become tired with the series (and, more especially, the press attention he received at every turn). Gaps between releases were slowly but surely lengthening (15 months between Goldfinger and Thunderball, 18 months and two calendar years between Thunderball and this). On screen, the Scotsman can’t hide that his enthusiasm for the role has waned. Reportedly, the actor’s fee was raised to sweeten the YOLT deal, and even though he was contracted for one more outing, the producers released him from this obligation (ironic, as the next would have seen him go out on an all-time high).

Director Lewis Gilbert would go on to call the shots on two of the most self-conscious Moore films, but it’s fair to say he didn’t prove to be the most dynamic of action directors. The spectacle, when it comes, has little momentum or sense of purpose to it. Geography is vague, even though long shots abound. In contrast, as an actor’s director, he was in his element when it came to more intimate dramas on a manageable scale (Alfie and Educating Rita stand out). The approach taken by the Bond producers appeared to be that a unified vision didn’t really matter as the Second Unit (here being handled by editor Peter Hunt) would take care of the action. They may be slowly learning their lesson, following muddled results in more recent years (including The World is Not Enough and Quantum of Solace).

On the plus side the theme song, sung Nancy Sinatra, is one of the most luxuriant of the series (sampled by Robbie Williams on Millennium). YOLT was (very loosely) based on the twelfth Fleming novel, and boasted a screenplay from Roald Dahl. Unfortunately there’s little evidence of Dahl’s fertile imagination on screen (he opined that it was assembled to the producers’ prescribed formula). YOLT is a leaden affair, rarely displaying wit or verve in plotting and characterisation. Where Goldfinger sparkled so brightly, YOLT sinks like a stodgy pudding.

Donald Pleasance pulls a nice turn out of his hat as a little man with a Napoleon complex (his Blofeld follows Largo – who sported an eyepatch – as one of the many Bond villains with physical impediments; here there is facial scarring about his right eye and cheek). Pleasance was a last-minute replacement for Jan Werich (who completed a week of filming before it was decided he wasn’t right for the role). And he is granted Bond-syle observational skills (rather than noting failings in etiquette as 007 does, he spots Bond due to the latter’s lack of knowledge of astronaut equipment). But mostly character takes a back seat to dubious commentary on cultural differences (Bond’s first line is “Why do Chinese girls taste different from all other girls?”) and seems to rehearse a fantasy version of the “Instant Japanese” phrase book that Moneypenny offers Bond.

The pre-credits sequence combines a rocket heist by SPECTRE (although the various nations suspect each other; had they not seen From Russia with Love?) with Bond canoodling in Hong Kong and then, apparently, being killed. This has become a curious obsession of the writers/producers; three of the four films featuring a pre-credits sequence have used it to toy with the idea of 007’s mortality.

Mike Myers appears to have borrowed most liberally from YOLT for Austin Powers, both in the appearance and tics of Dr Evil and the rocket heist imagery. The space scenes are well-rendered, even if SPECTRE’s space vehicle of choice looks a bit daft. In contrast, the killing of Bond is turgid stuff. Reportedly it played on the speculation of Connery leaving, although the theme of mortality is in the novel (Fleming having suffered a heart attack prior to writing it).  When we reach the point of Bond’s at sea burial, and retrieval, the elaborate scheme moves beyond the plausible. Particularly since Bond is successfully off SPECTRE’s radar for very limited time (and one wonders if it would have made any difference if he wasn’t).

Indeed, when it comes down to it, the vital key to finding SPECTRE’s base is an off-the-cuff remark from Kissy Suzuki about a big cave. It’s this lack of narrative integrity that makes YOLT seen so slipshod and lazy.

Tiger: For a European, you are exceptionally cultivated.

Tiger, played with some wit by Tetsuro Tamba (the “I… love you” code phrase is unsubtle but amusing) but dubbed by Robert Rietty, is, it seems, impressed by Bond’s cultural awareness. You see, despite being the last bastion of the British Empire, Bond respects other cultures. Why, he took a First in Oriental Languages at Cambridge (this is his first visit to Japan, however) and he knows the precise temperature for serving sake.

If his appreciation of foreigners is a surprise, 007’s eye for the ladies is now being exaggerated with each escapade. Tiger offers him the pick of his “very sexiful” ladies, who “always come second” to the man (“I just might retire here” comments James). It is this film (rather than OHMSS) where Bond, as Mr Fisher, first marries. Much casual conversation occurs about how Bond’s bride to be has a “face like a pig”.  Charming.

In one of the stupidest sequences seen in a Bond film, 007’s cover is protected by Tiger by turning him Japanese. Tiger runs a ninja training school, naturally.

Tiger: First, you become a Japanese. Second, you train hard and quickly to become a ninja like us. And third, to give you extra special cover, you take a wife.

Connery looks patently ridiculous “made up” as Japanese. But he might successfully audition as The Wolfman. Bond also learns ninja techniques in double quick time. Maybe this is what you get for employing a children’s author to thrash out your plot. I could quite see Moore making this palatable with a quizzically raised eyebrow, but there’s no self-consciousness on display.

As with Thunderball, ‘60s gadgetry is shoehorned into the story on the whim of whoever saw it and thought it to be neat and sufficiently Bondian. So, Little Nellie, a micro-helicopter, is Bond’s vehicle of choice (or Q’s choice) to investigate the SPECTRE lair. Apparently this is the only Bond film where 007 doesn’t drive. I’m unsure whether this indicates anything about the film as a whole, except that something is always left off a shopping list.

Whenever anyone discusses YOLT mention of the $1m volcano set is inevitable, as if this is somehow evidence of the film’s quality. But, as with the climax of Thunderball, the overall effect of the barrage of explosions and fighting is deathly dull. There’s a limited relief from finally getting to see Blofeld, and Bond’s exploding cigarettes, but the villain’s nefariousness was better illustrated earlier when he fed Helga Brandt to his vicious mutated sea trout. Sorry, piranhas. Which in itself is an obvious steal from the sharks in Thunderball. The grand climax is flabby and excitement-free until the point Bond presses the button and blows up the enemy spacecraft. And if you’re left wondering what the point of it all was, it’s been lost in lumpen, lazy plotting by that point.

Aficionados long nostalgically for the halcyon days of Connery, when Bond films were made with care and the result was always classy. But this is only really true of the second and third entries in the series. There is much that is positive to say about Connery’s return in Diamonds are Forever, but wherever you stand on that one it’s a very different beast. As it is, You Only Live Twice is one of the low points in the canon, iconic for a number of reasons (Blofeld, the space snatches) but bloated and charmless in the cold light of day. 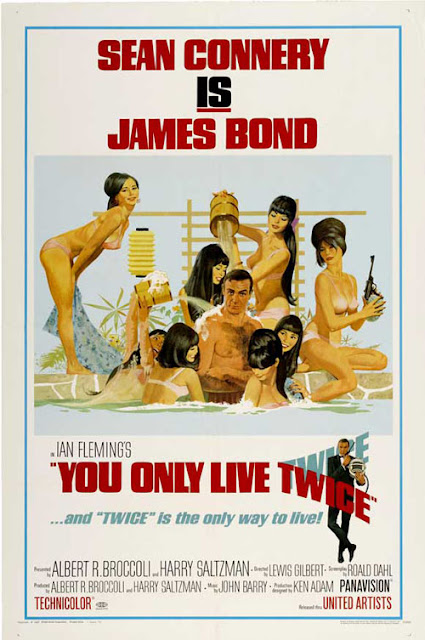