Well, he’s certainly not normal, not even for Blake.

The best thing that can probably be said about this one is that it isn’t dull. Ridiculous, yes. Treats its characters with complete disrespect, yes. Prone to unintentional hilarity, yes. But it can’t plumb Hostage depths of banality. This is Roger Parkes’ debut script, and he shows Allan Prior’s flair for lumpen plotting and making the crew act like idiots. George Spenton-Foster did decent enough work on Killer and Pressure Point, but here it seems he can’t be arsed, and you can’t really blame him.

Blake starts acting all strained in the Liberator exercise room, as if he’s constipated but hasn’t quite grasped it yet. This is the sort of introductory sequence they tried in Horizon with the Space Fatigue (yes, it’s back again) and Cally again as the unofficial Dr McCoy, and it works as badly here. Cally’s got them all doing exercises. Yes. At least Avon’s sarcastic.

Blake may be under the influence of as yet unknown forces, but he’s acting just like the prick he does every week when he wants to throw a tantrum at the Federation. He instructs a change of course to asteroid PK-118 (instead of the relaxing Del Ten).

Blake: I command the ship.
Avon: Do you, indeed?
Jenna: You lead. We don’t take commands.

In practice, they pretty much do what he tells them. And he’s become such a self-righteous arsehole that I’m not sure the series could have taken another full season of him.

Avon: He’s used a number of ploys to get his own way, but “Just try trusting me”? That’s weak even by his standards.

Thomas is dependable playing a distressed Blake, and even better at playing a wanker one, so from that point of view it’s a fun episode for him. Just not for the viewer.  It’s realised that he’s re-experiencing the brainwashing of his recent past and that the frequency he’s hearing is one used by Federation crimino-therapists (I know, I know).

Orac, who’s had bugger all to do this season since Shadow (such that the events of that story are referred to here), is giving most of the advice in this one although hooking Jenna up to Blake doesn’t do much good.

So far it’s all been mildly intriguing, but with Blake restrained Avon tells Vila to look after him.

Which means Vila has to become a total moron (at least his cowardice is reasonably logical; here he’s got a single digit IQ). Blake manages to convince him that Avon and Cally have paired up and have mutual affinities and Vila should let him go and set course again for the asteroid. It’s terribly lazy writing, but then most of this episode is.

Once Blake’s teleported down to the asteroid (having locked Avon, Jenna and Cally in a cabin) he encounters some CSO-d backdrops that would make Captain Zep ashamed.

If a story sets up a situation where the hero looks like he’s walking into a trap, the events have to be intriguing enough for the audience not to get exasperated with his behaviour.

We can buy that Blake is under the influence so not at his best, but not so much what he encounters on the planet. About the only surprising thing about this story is that Ven Glynd doesn’t turn out to be a bad guy, as it looks from the off that this is the clumsiest set-up ever.

Who could the bandaged man with the chronic Italian accent be? Is he really the rebel Shivan, with a fake eye sticking through his bandages (is it supposed to look like a fake eye? I’m not really sure)? Or could it be someone else with one eye who’s prone to over-acting? To that extent, it’s also the point where Travis finally turns into the Master, since his character so far only really lacked a penchant for disguises.

It’s also a problem that Avon and Cally (and Jenna) are convinced foul play is afoot throughout but never get it together to do anything about it. Down on the asteroid, they comply with Blake’s demand to take Shivan and Glynd with them to Governor Le Grand.

Le Grand will present the case against Servalan at the Federation’s Annual Governors’ Conference (sounds like quite a bash). But they know it’s all bollocks and it’s this kind of lack of motivation undermines what had potential as a premise (if it had maintained a level of never quite knowing what was going on/who’s up to what).

At least the appearance of Servalan (although, really, I’m beginning to tire of her inevitably arriving to hatch an inevitably thwarted plan every other episode) casts a little doubt over the precise nature of the scenario – we can only be certain that she has it in for Governor Le Grand.

Blake’s refusal of “Shivan’s” gift of necklace is a bit confusing in retrospect; I assumed it was a control device, but that’s the bloody great box Avon destroys later.

Orac’s positively effusive throughout, more chirrupy than crotchety. He advises Avon and Cally that they should look for the control device.

Avon: Locate and destroy it.
Orac: And restore Blake to his senses.
Avon: The two don’t necessarily follow.

Avon’s “Oh, well done Orac!” is Baker-esque in quality; perhaps he thought he had his very own K9?

In order to make Vila an even bigger cock, Parkes has him hoisted by his own petard at the thought of being ranked Deputy Leader to Blake, and puffed with the importance of bringing Le Grand to the ship. Croucher continues to his Italian Inspector Clouseau impression as plans for Blake’s anointing as leader of the new order proceed.

By the time Blake takes Orac’s key, and still Avon and co are standing around like lemons because the plot requires them to, you want to start throwing things at the TV.

And why does Travis suddenly reveal his true identity, other than the episode is getting on a bit? He confirms that Le Grand and Glynd are traitors. But why on earth does he want to teleport down to the conference? He’s got the Liberator! What a dickhead.

There’s actually a decent bit of intercutting, as Servalan’s mouth appears in close-up on the screen in the conference hall, telling the two Gs they’re rumbled as they get shot down.

What follows is as idiotic as everything else in the episode; Jenna farcically struggles to get Blake to put his bracelet on while a wounded Glynd goes for beardy Travis.

Fortunately, Avon smashing the control box puts an end to at least some of this. Biggest unintentional laugh award goes to Travis again (he’s stacking them up with this and Hostage) as Federation guards burst in and he gives them an “Easy lads!” look. I almost like Croucher for that moment. Almost.

And it’s back to Blake being himself again; a complete tool. I’m itching for him to get lost in the melee on Star One now. Fortunately Avon’s on form (“Why don’t you just say thank you nicely”). I think part of the problem I have with Blake is that Thomas isn’t charismatic enough to sell the character’s wankerishness.

Avon: I am sorry to inform you that he is himself all right.

Abysmal, so bad it occasionally becomes giddily entertaining but unfortunately only rarely. With this and Hostage, Season Two isn’t showing the consistency of Season One. Worse, with the incessant Servalan/Travis encounters it’s beginning to feel a little tired. 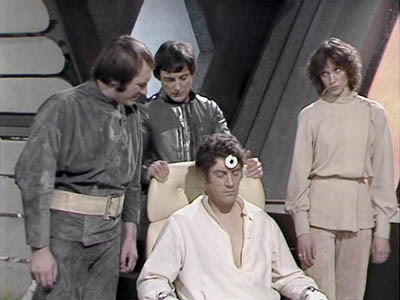 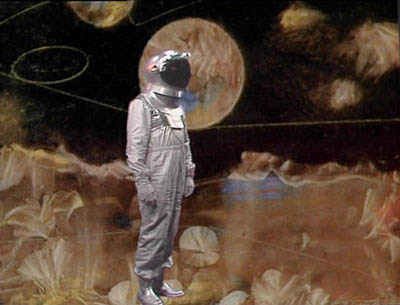 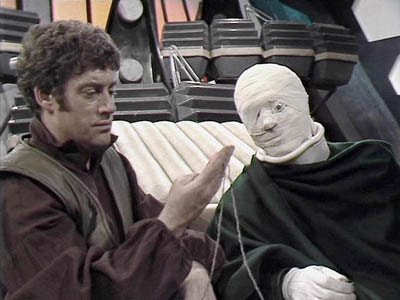 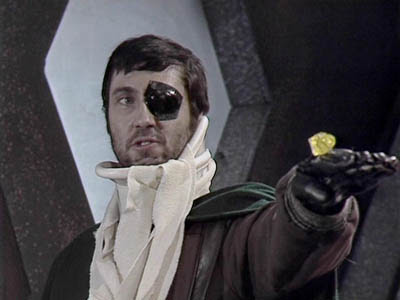