The Federation is run by hypocrites and supported by fools.

In some respects Trial follows Pressure Point’s precedent in juggling some very good material with rather less masterful moments. I found Trial more satisfying, though, perhaps partly because Chris Boucher opens the book on the Federation’s workings so intriguingly. Even Brian Croucher manages to be watchable for the most part. The Liberator crew doesn’t fare quite so well, although Blake’s bizarre planetary sojourn forms the backdrop to Avon voicing a barrage of caustic truths.

This episode features a decidedly svelte Kevin Lloyd (Tosh from The Bill) as Trooper Par, who reminded me a little of Maurice Roeves. Boucher letting us eavesdrop on a couple of Federation troopers (guarding the trial room where Travis will stand accused) is something  Douglas Adams would be taking the piss out of at about the same time in Hitchhiker’s. Adams highlighted the role of the bored grunt as something that sci-fi never bothers with, so it’s quite interesting that Boucher decides to take a fly on the wall approach to your average Federation guard (J M Straczynski did something similar in an episode of Babylon 5, quite possibly inspired by Blake’s 7).

It’s a nice bit of seamless continuity to have the return of Senator Bercol and Secretary Rontane from Seek-Locate-Destroy. Peter Miles is as watchable as ever, and his commentary on Servalan’s increasing power and acute understanding of her motivations is a welcome shift from the somewhat limited (and warped) perspective that spending all our time with Servalan and Travis has provided.  There’s an air of blithe indifference to his observations that makes him a very recognisably timeless politician.

John Savident makes a big impression as Fleet-Warden General Samor, the chief arbiter in the trial; he’s probably better known in B7 for playing Egrorian in Orbit (also the Squire in The Visitation and the explosive auctioneer in Hudson Hawk). Tosh refers to him as “old Starkiller”.

Boucher often constructs his stories with an emphasis on misdirection from scene to scene. Here he shows a conversation between Servalan and Major Thania, where they are plotting the inevitable guilty verdict against Travis, only to have Tania revealed as Travis’ defence counsel a scene later. Speaking of Travis, Croucher can’t even march properly. Unless he’s consciously trying to do a Ministry of Silly Walks. He’s accused of ordering the massacre of 1,400 unarmed civilians on Circasta, which is a not insignificant charge.

As frequently seems to be the case in B7, the set is a minimalistic white, which maybe a cheap option, but here the austerity works very effectively. Travis is tried at Servalan’s Space Command headquarters, enabling the re-employment of budget-saving model work (although maybe it’s all new, as they have to damage it later in the episode).  There’s further continuity to Season One with a computer deciding the accused’s guilt (the judges only decide the penalty).

Avon really relishes being able to rub Blake’s nose in his errors, and you can’t help agreeing with his barbs. Blake’s intent on sitting on an uninhabited planet, moping; Avon warns him that his three remaining followers might come after him. Blake suggests they might listen to Avon.

Avon: Why not. I don’t get them killed.
Blake: True.

Jenna’s all decked out in leather this episode; it’s about time. Which leads me to wonder. Why, in such a state of abject despair, did Blake feel inclined to get a haircut?

Jenna: It’s getting worse for him.
Avon: Guilt does that.
Jenna: What would you know about guilt?
Avon: Only what I’ve read.

At bit more of pure Avon-snark:

Vila: I wish Gan was here.
Avon: Oh yes, of course. He would be able to work out exactly what was going on.

And his sudden chumminess with Vila, attempting to persuade him of the appeal of being wealthy as opposed to fighting the Federation, is a rare moment of camaraderie with the lock picker.

His cynicism about the message left by Blake seems entirely reasonable (leaving it to the crew to consider, as will Blake, where they stand with each other and what they wish to do; if they still wish to, they can pick him up in 13 hours). Certainly, Blake doesn’t outright deny it when he and Avon discuss this point at the end of the episode.

Vila: He really cares about us.
Avon: You swallowed that?
Cally: You think he was lying?
Avon: Everything but the self-pity . That was real enough.

Peter Miles gives us our first insight into how far Servalan’s grasp stretches;

Rontane: Servalan’s ambitions threaten us all. And the President particularly dislikes being threatened.

Particularly amusing is the switch in his conversation with Bercol, without a beat, to “Shall we dine?” Indeed, the dialogue throughout this episode is particularly choice. Well, apart from bloody Pob down on the planet.

Travis is given such a good role in this episode that even Croucher can’t completely ruin it. Thania’s attempt to suss out the Space Commander’s behaviour (although I’m unclear exactly what she’s trying to achieve by giving him alcohol – whether he’s drugging himself seems to be shooting herself in the foot) sees him one step ahead of the viewer. Par appears to commiserate with Travis and in the following scene we realise that he has been put up to the task by Thania. Thania quizzes Par on Travis’ accountability.

Par: No doubt. He gave the order, we just did the shooting.

That certainly sounds like a concentration camp guard’s defence, and Travis follows that line of reasoning in his later defence; the system made him what he is, so the system is to blame if he is.

Travis’ splenetic dismissal of Thania when she goes to speak to him is particularly strong. I’d rather not have to damn Croucher with faint praise, but he’s really got Boucher’s script massively on his side here.

Zil… Certainly credit is due for a fully-formed loony bird creation. The body stocking probably wasn’t the best way to sell an alien life form, though. I’d hesitate to say it undermines the episode, because it’s just such a bizarre plotline (the planet being alive echoes Solaris, and predates the asteroid creature in The Empire Strikes Back, but the execution is many leagues less effective than either).

There’s a clumsy attempt by Blake to parallel the behaviour of the parasitic life form to rebellion against the Federation at the end, but the analogy doesn’t really stick. Indeed, Blake’s worst moment in the episode is his “I am not ready to surrender anything” after Zil is absorbed, as if he has come to some sort of glib Hollywood realisation.

Avon doesn’t actually tell us why he is the first of the crew to actively decide to stick with Blake, to the extent that he starts searching for the homing beacon. He insists that continuing to follow Blake is not quite the same thing as letting him lead. Jenna asks him why he’s not searching the southern hemisphere.

Avon: I don’t believe Blake can think and swim at the same time. It’s nothing but ocean down there.

Blake’s return to the ship sees a top class conversation between him and Avon. The former says that the next time he wants to think he’ll stick to his cabin. Avon tells him he should stick to action, that’s what he’s good at, before advising that at some point the crew will leave him, as they were almost ready to this time.

Blake: Yes, I thought they might be.
Avon: You handle them very skilfully.
Blake: Do I?
Avon: But one more death will do it.

Croucher slumped in his chair with his legs outstretched shows an amusing attitude to the court proceedings. But Croucher being Croucher, his big moment of accusing the court of guilt lacks the punch it should; Travis just seems like a ranting child, rather than there being any power to his words. It does the trick in ruffling Servalan, who did not expect him to take the floor, but the tribunal’s verdict still voices moral repulsion at his behaviour (his actions are those of a savage, unthinking animal). Which, again, suggests a system not as overtly corrupt as Blake would like to make out.

The Liberator’s attack on the space station is dramatically effective, if reliant on some rather less likely and inconsistent behaviour from the crew, swiftly on board with another death-defying mission at the direction of Blake. And Avon’s Federation ship detection-evasion is a highly fortuitous rabbit-out-of-a-hat development. What saves this is that it continues Blake’s cock-ups, as he is instrumental in saving Travis from the gallows.

Travis’ parting shot to the court makes you really wish it was Greif in the role.

Travis: The Federation is run by hypocrites and supported by fools. I’m glad to be rid of you all.

His confrontation with Servalan amidst the confusion of the attack, where she still attempts to gain the upper hand (he demands a ship and she provides one with a complement of Mutoids, in order to track down Blake), sees him spit that he’s not going to let her use him anymore. Good luck with that, Travis…

Which leads to the laugh-about final scene. Avon and Blake laughing together at what an idiot Vila is has an undercurrent that seems unintentional. Because you don’t believe Avon is doing anything but acting for his own purposes, and that Blake is willing to do anything to buy favours with his bad lieutenant.

Avon: It’s not often one comes across a philosophical flea.
Blake: “Resist the host or your oneness will be absorbed.”
Vila: That’s the stuff legends are made of.
Avon: Then again, perhaps they are not so uncommon.

Well, then, it’s good to know Blake got over Gan so quickly!

Confidently directed by Derek Martinus, and tightly scripted by Boucher, even the less successful elements (Pob, Croucherisms) don’t dent the continuing arc of the season. This and Pressure Point are the equivalent of the mid-season two-parter, I suppose, an idea that would become de rigueur in ‘90s US sci-fi/fantasy US TV and then filter back into British TV. 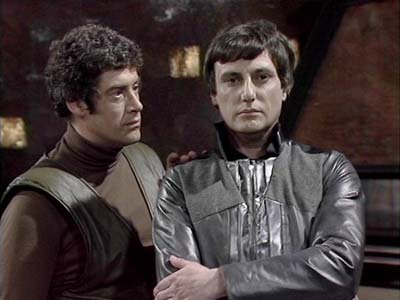 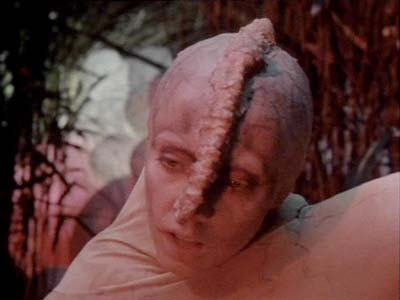 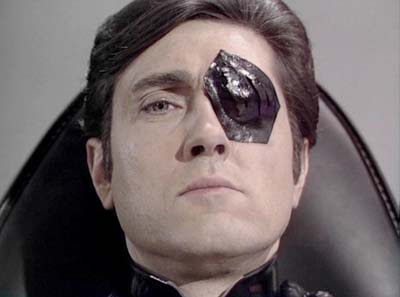 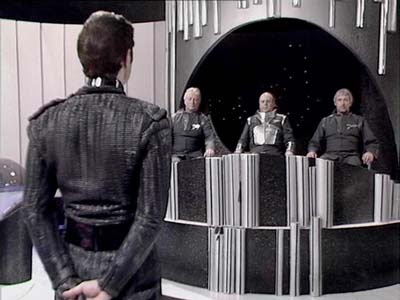 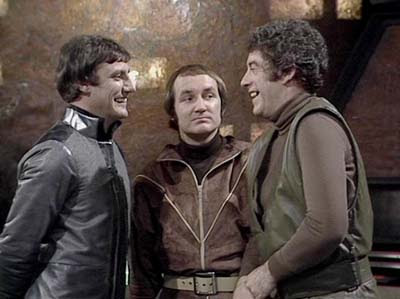