I once knew somebody called Del Grant, but it was a long time ago.

So Tezza’s back, and he’s come out fighting. One of the reasons Countdown is such a success is the escalation of threat throughout. It’s a very well structured episode, knowing just when to introduce a new element to maintain interest or increase the tension. A ticking clock is usually a reliable trope, and it’s used here with confidence and skill. The only real losers are Jenna and Cally, completely sidelined on the Liberator.

Vere Lorrimer’s risen to the challenge of the material, after his lethargic work on Hostage, and the opening fight sequence between Federation forces and  Albianians is well-staged despite the old “throw a load of stuff into frame to give the illusion of collapsing masonry” trick. The initial conversation between (Space) Major Provine (Paul Shelley, Persuasion in Four to Doomsday) and Sergeant Selson suggests Provine may be rather disillusioned with the Federation. He tells Selson to spare him the propaganda about courageous defences being fought against the Albians; he wants a little more reassurance than blind patriotism. But when Provine makes the decision to activate the nuclear Solium radiation device (which will wipe out the populace but leave no trace of radiation after less than a day – very handy) it’s Selson who is revealed to have misgivings over the justifiability of such an action.

After a trend of suggesting that the Federation is made-up of people who really aren’t so bad, Nation envisions a scenario of ruthless measures taken against any insurgency. It does rather conflict with the attitude presented at Travis’ show trial as it means that six million innocents rather than several thousand will be massacred.

The opening sequence ends effectively with a bloody Tronos (quite a lot of vivid ‘70s blood in this episode) pressing the button that triggers the countdown to detonation of the device. Effective too to have Provine unable to make his escape and required to rely on cunning throughout to survive (which he appears more than capable of).

Besides Shelley, the other main guest actor is good old Duggan (Tom Chadbon, City of Death and The Mysterious Planet) as Del Grant, and the line of conflict between him and Avon is the emotional core of the episode, skilfully played out against the ticking clock. By this point it seems quite clear that the producers of Who and Blake were watching each other’s shows for casting inspiration, with a mutual flip-flopping of cast members sometimes within only months. It’s a decent enough idea, having Del as a mercenary for hire, although it does rather grey his voiced hatred of the Federation that he won’t act against them without a pay cheque.

Blake’s taken a few episodes to get back on his quest to find Central Control, and here he’s after Provine as he apparently served there (one has to assume he was blindfolded though, given that the information he imparts at the end of the story is indirect).

The Federation has a “Space Assault Force”. This is no surprise.

Good use is being made of that shuttle craft prop; it returns here as the escape vehicle that Provine couldn’t make it to.

The background to the revolt on Albian is the usual tale of the Federation bleeding the people dry, making impossible demands on the economy and giving them no say in the government. The idea that the Federation needs only a force of 100 troops on the planet due to the power of their deterrent is quite a clever one on the face of it, but I’m dubious about their willingness to ever enforce such might given what we’ve been told in the past about its political schisms. Surely the risk of mass uprisings when news of such an act spread would be disincentive to use such a device? Certainly, the Albians didn’t think they’d ever use it. And why doesn’t the Federation just install one on every planet to keep the population in check?

Avon’s revelation that what they thought was the device is just a sub-etheric transmitter is a clever twist; it could be up to 10,000 miles from their location.

Provine’s attempt to bribe the guard in the rocket bay fails (although at first it seems like he might have a chance) and he shows his smarts by donning rebel fatigues and blending in with the good guys.

Avon is given a vastly superior back story to work with than the one Blake was saddled with in Hostage. His history with Del Grant cleverly raises the stakes again, and Nation does extremely well juggling these different elements. That said, when Blake asks why he doesn’t seem interested in confirming whether Del is the same man he knew, the reply is a bit puzzling.

Avon: Because the Del Grant I knew said that if we ever met again he would kill me.

Given Avon’s recounting of events later it’s unclear when Del is supposed to have said this to him, as Grant ought to have asked him what had happened if he’d seen Avon face-to-face following Anna’s death (or just cut to the chase and killed him outright).  Maybe it was hearsay that Avon had picked up. That said, it’s a dramatic line and to an extent that’s enough in itself.  It’s an interesting change to cast Blake as the coolheaded one, not that Darrow plays Avon as flustered at any point, and the scene where Grant sets out his belief that while his sister may have died under torture it was Avon who killed her is superb.

Having Avon and Grant play out their issues at the polar ice cap location of the device is another smart move. Blake shows surprisingly solidarity for the crew member who’s the biggest thorn in his side.

Blake (to Grant): One more thing. If anything happens to Avon, I will come looking for you.

It must be a sign of the writers’ preference for Avon that this is the second story of the season to feature a face from his past.  There’s a surprisingly long establishing shot of the polar region, and once inside the base it’s again to Nation’s credit that he comes up with some decent obstructions to Avon and Grant completing their quest; the device is buried in a block of ice, the heaters are damaging the base’s structural integrity there are three detonators that require attention, not just one. And all the while Avon explains his version of why he couldn’t save Anna. Of note is that he professes to have killed the dealer in visas, having previously been vague when Jenna asked him if he could kill anyone.

Lorrimer’s wisely shot this location on film, and there’s a credible feeling of the two of them up against the elements, particularly when the room begins flooding.

Blake’s surprisingly frank about his intention to leave the planet if it looks like there’s no chance of averting the detonation, and the stoicism of the Albians mirrors this.

Vila’s called upon to be a prize lemon yet again, told where the disguised Provine has gone with Blake but forgetting the directions (although why Ralli couldn’t have just gone herself I don’t know). He arrives just as Blake’s shot Provine. The promise of medical attention slightly unbelievably elicits a confession from Provine concerning the location of Central Control.

Somehow the chink in Avon’s armour, in terms of his relation with Anna, doesn’t diminish the character or lessen his steely remoteness. Perhaps because Darrow refuses the opportunity to wallow in the emotional baggage. And the reconciliation of the two is also underplayed; a simple handshake with recognition but no glimmer of warmth from Avon.

Vila: Any time.
Del: I’ll remember that.
Vila: Oh… Will you?

Blake’s left smiling like a gormless Cheshire Cat when he and Avon have their final exchange. God knows why. He asks Avon to tell him about what occurred.

Avon: You wouldn’t understand.
Blake: Wouldn’t I?
Avon: I doubt it.

There’s nothing here that’s hugely original in terms of concept, and there’s no verbal or conceptual flourishes or larger-than-life elements, but Nation delivers a finely honed script packed with incident and tension. Most significantly, the interaction between Avon and Del is masterfully played out. 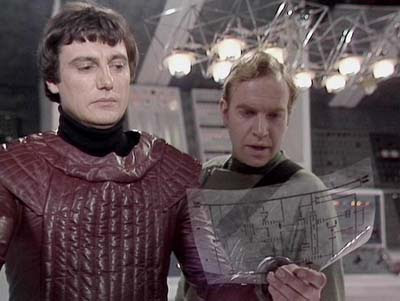 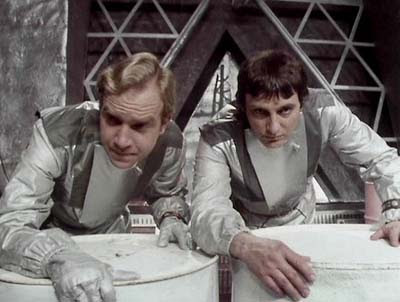 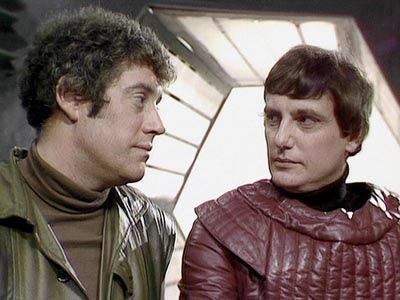