I’m very sorry, but under certain conditions I can’t resist the temptation to be a cad.

A convoluted plot for RKO’s second outing for Simon Templar, and quite stagey with it (news bulletins announce the Saint’s involvement in a New Year’s Eve party shooting, so presumably the world knows who he is). Templar takes on the case of a woman, Valerie, whose policeman father was framed. She has resorted to stirring up trouble for the police department as a result by establishing a criminal gang. Yeah, it doesn’t seem to make a whole lot of sense, but Wendy Barrie makes a fairly convincing tough-as-nails dame. Despite the difficulty in following who’s doing what and why, the true mastermind behind the frame-up is quite obvious.

What makes this fun, despite its narrative failings, is George Sanders. He’s phenomenal. Smooth, debonair, witty; he’s the smartest man in the room and never misses an opportunity to condescend. This was Sanders’ first time playing the Saint (Louis Heyward was cast in the previous film) and apparently, he isn’t very Saint-like. What matters, though, is that he’s very Sanders-like. He forces a kiss on Barrie at one point with the line, “I’m very sorry, but under certain conditions I can’t resist the temptation to be a cad“.

Later he impresses Oirish tief Zipper Dyson enough to persuade him to return to his gang under false pretences with a black eye – as proof of the trouble he’s been in. Zipper protests that he doesn’t have a black eye. “Oh, I can rectify that. Just look up there” replies Sanders before biffing him one. I wondered why he had taken to calling his black butler “Algernon“, until it becomes evident that he just likes making names up for people:

Templar: He doesn’t really want you to call the police, Strathmerton.
Brown: My name is Brown, sir.
Templar: I prefer Strathmerton.

Jonathan Hale, as long-suffering associate Inspector Henry Fernack, is given the best sequence, though. Templar runs rings around Henry throughout, disembarking a plane only to reboard it (leaving the pursuing Henry wandering the airport in his dressing gown). Henry, intent on delivering Templar and Valerie to the police, is distracted by the offer of hearty seafood meal (he is on a strict diet). Soon after consuming said feast he falls ill, giving way to hallucinogenic delirium as lobsters and crabs dance before his eyes (one even drives past in a cart). 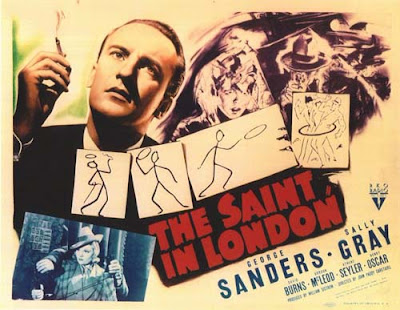 Sanders’ second excursion as Templar is better structured and paced than its predecessor, but still manages to make the villains’ plot seem almost incidental to the main fact of their villainy. The scheme involves a ring counterfeiting foreign currency and the attempt on the life of a national of that country.

This was Leslie Charteris’ favourite of the RKO pictures (a falling out with the studio led to Sanders’ becoming identikit sleuth the Falcon for four more films, before he moved on), and while it is very witty, it doesn’t quite have the edge to the dialogue that Strikes Back gave the title character. John Paddy Carstairs’ film really shines with the supporting cast, though.

David Burns steals every scene as Dugan, pickpocket turned Templar’s valet (he lifts the Saint’s watch in the first scene, Templar doing likewise with Dugan’s timepiece, and Templar orders him dinner at a high-class hotel in return). Fast-talking-back to villains and authorities alike, his best exchanges are with long-suffering Inspector Teal (Gordon McLeod). He takes offence when Teal suggests he spent time in Sing Sing (“San Quentin!“) Teal further doubts his cooking skills and is told that Dugan cooked for 1,200 men, three times a day for five years.

Teal: How long will it take for Mr Templar to finish his bath.
Dugan: I don’t know how badly he needs it so I can’t tell ya!

Sally Gray plays plucky helper Penny Parker and is every bit Sanders’ screen equal. Gray would reappear in The Saint’s Vacation and also in Alastair Sim classic Green for Danger.

Penny: I wish I could kick myself.
Templar: Perhaps I can oblige later.

There’s a running gag of “I’m Alonso Moseley!” proportions as Templar continually misidentifies people, including himself, as Teal. The Inspector also has a nice little quirk in reassuring phone calls to his wife. Henry Oscar makes for a decent villain (Bruno Lang) but, as the bad guys are revealed early on, there’s little in the way of mystery for Templar to solve. It’s more of a confrontation/capture/escape affair. 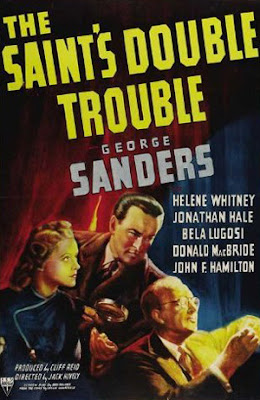 Fairly daft outing built around giving George Sanders dual roles. His Philadelphia hood isn’t particularly distinct (couldn’t he do an American accent?) although, technically, his sharing scenes with himself is quite effective. Said hood is leaving cards identifying the Saint as doing dastardly deeds (except no one ever sees him doing them, so he might as well be anyone leaving cards). There’s a couple of reasonable mistaken identity scenes, but the final ruse by Templar to expose the villain (as usual the police are quick to suspect the worst of him) is highly unlikely.

Jonathan Hale returns as Henry, who just happens to be taking a holiday in Philly (visiting the police department there, no less). Additional support from an under-used Bela Lugosi and Helene Whitney as an ex. The tale starts promisingly with the delivery of an Egyptian mummy to her father, but that’s as intriguing as it gets. Also on display; the Saint’s athletic ability, particularly when it comes to hitching rides by leaping onto car bumpers. 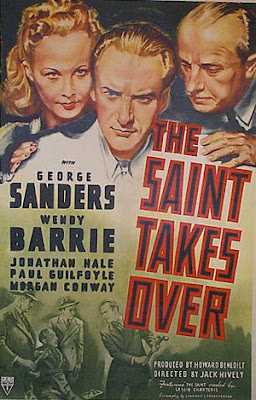 George Sanders’ penultimate Simon Templar adventure. Jonathan Hale’s back as Inspector Henry Fernack and this time Henry’s lost his badge, framed by mobsters. Much of the enjoyment comes from the turnaround in the typical roles; Templar is usually under suspicion and Henry threatens to arrest him but knows he’s innocent really. Now it’s Templar mocking Henry for possible guilt every time a mobster’s fresh corpse is found.

This is accentuated by the actual suspicion of Templar’s newly adopted “pet”, incompetent milk-drinking hood Clarence “Pearly” Gates (Paul Guilfoyle). Pearly returns in the last Sanders picture. Wendy Barrie, who also played the broad in The Saint Strikes Back, is the aggrieved revenger seeker bumping off those responsible for the death of her brother. A downbeat ending, not quite in On Her Majesty’s Secret Service territory, but it leaves Templar (who has been smart-talking his way through these under-seventy-minute-long adventures with minimum fuss) in reflective mode. 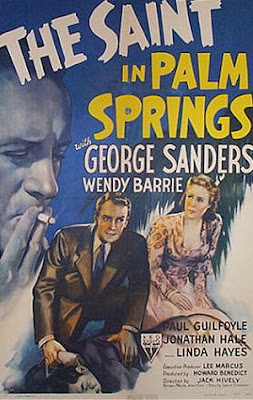 Passable but as lightweight as the title implies. The Saint is volunteered by Henry to deliver some valuable stamps to, surprise-surprise, Wendy Barrie. When they are lifted, he sets about finding the thief/thieves, aided by Pearly Gates. Gates is a likeable doofus, on parole and acting as house detective at the hotel where the theft took place. There’s an amusing sequence where Gates is persuaded to return to his pickpocketing ways in order to solve the case.

If the guilty parties come as a surprise, it’s probably because the characterisation is so thin. Templar’s at his most Roger Moore Bond in this film, caught eyeing up models in the pages of a magazine and provoking jealousy at the hotel by turning on the charm with two different ladies.

None of the Sanders Saint films are a dead loss, but neither are any essential. They’re amiable enough to pass the time, however, as Sanders is never less than charismatic and slightly louche.