I am not expendable. I am not stupid. And I am not going.

It couldn’t last. After a couple of innovative episodes, Allan Prior’s debut script falls back on tired material as its premise; oppressed natives and unsubtle parallels to colonial rule.

The opening business on the Liberator (curiously, we see Jenna – and Vila –  transposed over a starscape, but she’s not exactly taking centre stage here; I presume this symbolises the crew’s malaise) revolves around the crew all suffering from (space) fatigue. With Cally taking the role of Dr McCoy. I suppose a nod to their constant encounters with the Federation was in order, but it’s a little silly that everyone should be afflicted at the same time, and to tackle it in a way that makes Doctor Who’s “We need a holiday” prologues look nuanced.

Blake starts off being a curmudgeon and his image isn’t exactly redressed by the events that follow. He decides to recklessly investigate the space freighter heading for planet Horizon (they’re outside normal Federation space), dragging Jenna down with him, although he also moots finding a planetary base for the crew. It seems the ship’s drug manifest takes its cues either from Burroughs or Huxley or both (or maybe just Hinduism) as Vila’s stabiliser shot consists of one third adrenaline and two thirds soma.

Cally: He’ll be sleepy for about half an hour.
Avon: How nice.

The undercurrent of Avon’s increasingly vocal disagreements with Blake is accentuated, with him seriously considering legging it; Blake takes Jenna with him for the express reason that she’s the best pilot on board, and Avon might think twice about leaving without her.

Jonathan Wright-Miller makes a good fist of visualising Horizon as a rather fetid hole, mixing (presumably) Wooky Hole location work with studio sets. Aided by some useful dry ice. Unfortunately he hasn’t got much to support him plot-wise. The natives don’t even have a chant of “Kroll” to distinguish them. They fire blowpipes and dig in the mines, but that’s about all. They even get horrendously patronised by Blake later.

Avon should go around with a big sign on him saying “I’m not a thickie like you lot” as that’s clearly the message Boucher’s intent on sending to us. He’s the only one unwilling to go chasing after Blake and Jenna, both of whom have been detected by surveillance cameras and blowpiped. And in quick succession the same thing happens to Gan and Vila.

Avon: You are expendable.
Vila: And you’re not?
Avon: No, I am not. I am not expendable. I am not stupid. And I am not going.

The colonial rule theme is reinforced by having an Indian actor, Darien Angadi, play Ro. Ro was one of the planet’s native inhabitants, but taken away and educated by the CEC (I’m unclear how they distinguish themselves from the Federation – are they like the civil service?)  Angadi gives a strong performance of conflicted loyalties and indecision, but the script is strictly one-note. The visiting Kommissar (William Squire, the Shadow in The Armageddon Factor) and Assistant Kommissar (Brian Miller, Mr Elisabeth Sladen, and Duggan in Snakedance) have educated him and set him up to rule in their image. The Kommissar is thoroughly hissable, which makes him a rather bland character.

The script requires Blake to suddenly be very informed about both the ore being mined (Monopasium 239, which is radioactive) and Ro himself, as very conveniently his old chum Poura was on the London bound for Cygnus Alpha. Blake can even remember what Poura said about Ro’s father (who turns out to have been murdered by the beastly Kommissar)! Blake’s rallying call to rebellion is unfortunately as uninspired as most of the other elements here.

The mining scenes are distinguished by Blake and Vila displaying their untoned torsos, and Jenna having grubby cleavage. Oh, and the scene in which Blake instructs the ignorant natives on how to take turns to eat. Good grief!

The Kommissar’s comments on Vila are quite amusing; he talked at once, and has never done a day’s work in his life.

So Cally follows everyone down to the planet and is promptly captured too (Avon: “And then there was one”). At least Prior does something with Cally before she gets sent down the mine, exposing to Ro that the Kommissar killed his father. Recognition of her mystic qualities also jog his memory of his heritage. Interesting that the Kommissar dismisses her abilities as superstition; surely such faculties have been encountered far and wide through the galaxy by this point?

All this rather stodgy planet-bound material goes to make Avon’s deliberations on making off on his own much more interesting. His analysis of his chances (to the increasing exasperation of Orac) is a highlight of the episode (he has enough food for 1,000 years and his chances of avoiding the Federation are 3.5 to 1. He can also resist up to three Federation ships attacking him. There’s something of Rutger Hauer about his staccato tones. His reaction of laughter when told of the three incoming Federation ships, forcing his hand to rescue the rest of the crew, is a great moment.

And the acumen with which, once he teleports down to the surface, he takes out various detection devices, shoots four Federation troops, narrowly avoids killing Blake and rescues the entire crew is hilarious in itself. And almost makes up for the preceding trudge.

It’s curious that Ro’s missus (you can see why he sent her down the mines as she won’t shut up once she’s released, that and she bears a disturbing resemblance to Corporal Klinger from MASH) is interrogated by means of having her hand stuck under what appears to be a 1970s record player.

Blake inevitably teleports back to help, although this sequence is initially a bit confused. He shoots the Assistant Kommissar while Ro, now dressed in tribal gear, blowpipes the Kommissar.

All very poetic, I’m sure. But a bit limpid. Blake is told he’s welcome to Horizon any time he likes. Presumably he’s not too worried about the inevitable Federation reprisals on the planet – for rebellion and for cutting off their ore supplies. But that’s the kind of guy Blake is.

There’s a bit of last-minute dealing with the incoming spaceships. What’s more curious is that Blake had time to clean up and change before he went back down to the planet. Whereas Jenna and Vila are still filthy. Perhaps they like it that way. As usual, we end with frosty words between Blake and Avon. But the final words are Vila making a joke (“I tell you this though, it beats work”) in reference to running from the Federation. 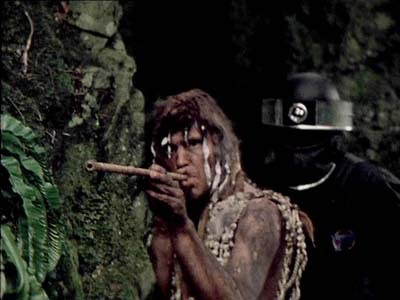 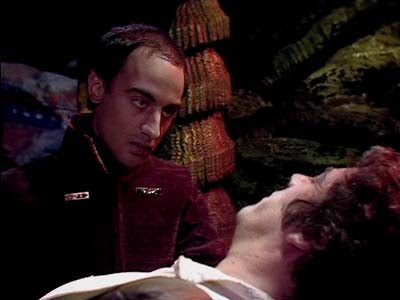 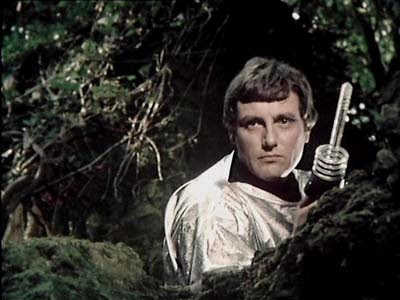 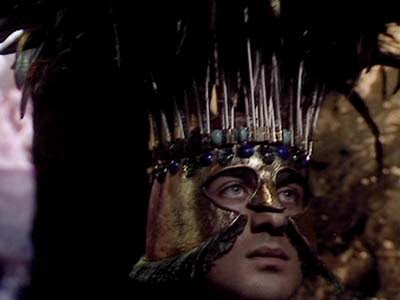 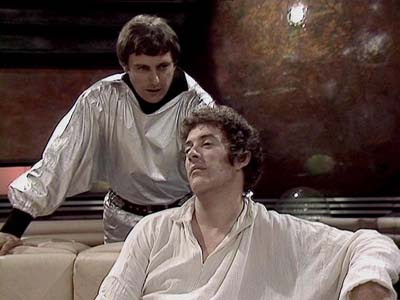