The system is infallible.

Terry Nation originally intended to write five episodes for Season Two, which is pretty much the formula adopted by nu-Who’s showrunner. In the event (due to Nation’s general shoddy-delivery rates, no doubt) he didn’t, and we were also spared the dubious delight of a Pip & Jane Baker script. The running order for the first half of the season changed quite significantly, and I will note this in respect of later episodes in due course. As for the season opener, it’s the first without Nation’s name on it, although with script editor Chris Boucher at the quill it was in safe hands (especially since he likely ghost wrote significant chunks of the first season). It’s also a fairly typical example of how many people remember the series; the crew running about in a power station while guards dressed in black shoot at them.

The first half, from that point of view, is much more satisfying – and more cerebral. Dealing with the aftermath of Orac’s prediction of the ship’s destruction, we hear some rather dubious conversations on the subject combined with the gradual realisation that the Liberator is out of the crew’s control.

In the space of a few hours, many of the crew have also undergone costume changes. Blake favours a brown leather coat and boots, while Avon has joined a gay biker gang, head to toe in black leather (and studs). He appears to have had the most spent on his wardrobe, as befits the most popular character. Gan dons a cape/jacket looking affair, while poor Vila is left with thrift shop tat. Cally doesn’t look that glam either, whereas Jenna always does.

Blake’s obsessing over the demise of the ship is like some poor Joe who’s just had a bad Tarot reading.

Blake: Why won’t you give us the background to that prediction?
Orac: Because that would invalidate the prediction.
Blake: And if we knew the future in detail we could change it, so it wouldn’t be the future.
Orac: Correct. That is the paradox of prediction.

To which my response is, so what? Surely that’s exactly the desired result and Orac shouldn’t be so bloody-minded about his calculations. The obverse view would be that he knows it isn’t Liberator and if there was any actual danger he would give Blake the lowdown. But that isn’t the way it comes across.

The next part of the scene, as Avon tells Blake what a pranny he is, just rubs in how the writers see the nominal lead. No wonder Thomas wanted to shove off. Avon tells Blake he’s been looking at the wrong things as he’s a complete doofus. Avon isn’t even inclined to explain further.

Blake: If we’ve missed something I want to know what it is now, Avon.
Avon: Well, now, all you had to do was ask.

Avon’s subsequent lecture on the nature of prediction uses logic to disassemble any mystical trappings to Orac’s prophecy. Humans can predict the short range future with reasonable chances of success.

Avon: For example, imagine you are standing on the edge of a cliff.
Blake: As long as you’re not standing behind me.

I like that Boucher is willing to chance the series with such a slow, verbose opening sequence; sure, it all changes in about twenty minutes, but it’s not what you’d expect. Predictions are based on known facts (a number of possible alternate futures) and computers are no different, such that (Avon believes) the prediction is not an immutable fact. If Blake didn’t go near the cliff in the first place, he couldn’t fall of it. And so Avon reveals that the image of destruction clearly showed the sector of the galaxy involved (the twelfth.) Blake asks Avon why he didn’t tell everyone earlier.

Avon: All they had to do was ask. Perhaps in future they won’t rely on you to provide all the answers.

The reaction to being attacked by what look like mini, single arm Liberators is a bit duh. They have no idea what they are. Use your eyes! The fast-travel effect (moving backdrop behind the ships) isn’t the most dazzling we’ve seen, but far superior to the cardboard cut-out Liberator.  With the ship apparently damaged (Blake is again shown to be a bit of simpleton next to Avon’s honed intellect as he considers their escape lucky), Blake gives instructions for repair.

Blake: Avon. Concentrate on Zen. Give priority to the detectors and the navigational systems. And then see if you can get us some scans.
Avon: Is that all? What shall I do with the other hand?

Vila: When you get Zen working, ask him to prescribe something for a headache, will you? I’ve got a shocking pain right behind the eyes.
Avon: Have you considered amputation?

Avon relishes being right throughout this episode. Which is fair enough, as everyone else is dull-witted to varying degrees (Orac excepted). So he realises that they were allowed to escape well before anyone else.

The System obviously digs chicks, as it puts two in charge. Alta One (Sheila Ruskin, Kassia in The Keeper of Traken) and Alta Two (Harriet Philpin, tomboy Bettan in Genesis of the Daleks) wear nice tight blue body stockings, but as an example of alien costume design they’re decidedly lacking, with cheap transparent plastic accoutrements. Their guards are decidedly gimpish, clad in black body stockings and visors disguising their faces. Still, Ruskin and Philpin embrace the robotic in their performances.

The attack on Blake (attempting to shut down the drive) by an antagonistic cable recalls Death to the Daleks, and for the most part the scene is quite effective (except when it goes into snakelike concentric coils).

Again, Avon’s ahead of the game; don’t go near the teleport he warns (so, of course, dense Gan ganders down there).  He’s summoned to help Blake, and is given status reports by the rest of the crew.

Avon: I shall tell our fearless leader.
Vila: If it ever comes to a showdown, my money’s on Blake. Well, half of it. I’ll put the other half on Avon.

He saves Blake, of course (“Don’t worry. At the right time I will remind you of it”), and the scene where he distracts the coil is well-sustained and tense.

I’m not sure the System needed to pick off the crew one-by-one, other than it adds an edge of tension in the episode. They could clearly transport a shed load of gimps on board and make short work of them.

Perhaps it’s because he’s a newbie crewbie, but the set-up of Orac being asked to give priority to bringing Zen back under their control as Avon, Blake and Jenna are led out works very well in terms of what happens later. And it’s a nice touch to have Alta One shoot an inquiring look at the whirring Orac before she leaves the flight deck.

Blake’s penchant for pointless heroics sees him on the receiving end of several resounding punishments. Gimps administer “force levels” on him for interrupting and generally making a nuisance of himself. But it’s one of those situations where he keeps getting told not to push it, yet when he goes that extra step they don’t carry out their threats to kill him.

Some decent model work for the station, but a woeful decision to use airport runway-at-night stock footage for the docking of the Liberator. And they use it again later when it leaves! It’s this sort of thing more than anything that screams cheap.

So, the power station. Well, it’s big. It allows for a stuntman to do an impressive high fall later on. Blake helping a particularly wretched slave (Roy Evans, of The Daleks’ Master Plan, The Green Death and The Monster of Peladon) is there to highlight how noble he is, but as mentioned it makes the System seem like it doesn’t follow through on its threats.

The increasing flow of information on the “disturbance in the control program” as Blake is interrogated makes an intriguing, building indication that something is afoot, and tells us that we should not underestimate Orac (although we don’t yet know this is what is going on). Blake is told questions are not permitted, then he asks what the System is and they tell him. Where’s your sense of discipline, System?  The System is the supreme power of Space World (a jigga-jig-ah), so Terry Nation must have given Boucher notes somewhere along the line here. A complex of infallible machines, and the Altas are computer-controlled. I think we’d realised that, though (so Roy Evans going into even further background later is a tad unnecessary). Orac’s causing Alta One’s sphere to smoke!

Blake: It’s nice to know computers can have their bad days too.
Alta One: The system is infallible.

Oh come on, just kill him for his impertinence.

Avon takes a bit too long to note the star pattern out of his cell window, since most of the audience would have spotted it straight away. So he’s slightly behind for once in the episode. His punching Vila in the stomach as he opens the door to rescue him and Jenna is predictable but funny nevertheless.

With the crew reunited, it’s time for first Roy Evans (“Destruction level”) and then Blake to get sadistic with their captors, putting the submission sticks against Alta Two and a gimp’s necks.

Perhaps as punishment, Roy Evans has little to do but then die. For no apparent reason he decides to stay and close a door, presumably because he’s a bit too unattractive to join the Liberator?

Some frankly lousy extra work as two of the gimps, about to throw grenades into the Liberator, are teleported back to System HQ and throw them at Alta One. Not quite the stunning explosive climax hoped for.

And, of course, we discover the exploding Liberator was actually a sister ship.

Orac: I took the precaution of scrambling the launch system. It pre-detonated their missiles. Had I not done so, my prediction would have been inaccurate.

So there’s an amusing touch of vanity to his saving the day.

And as usual, we end with a Blake/Avon stand-off. Avon questions returning to Earth sector for “unfinished business with the Federation” as staying in the Twelfth sector is not the only alternative. His look at Blake in response to “Go back to your position” is of the “I’ll shoot you repeatedly in the guts one day.”

Okay, the fireworks of the last half are a bit on the run around, blow shit up, side of things, but the story maintains interest throughout. And credit is due for serving up Blake’s 7 aliens wearing blue body stockings. 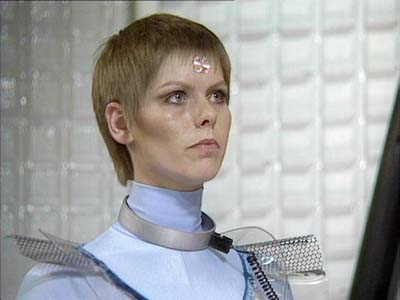 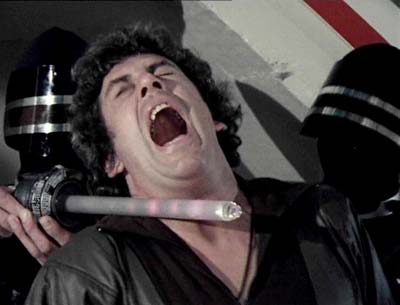 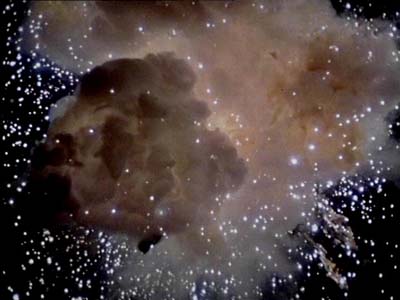 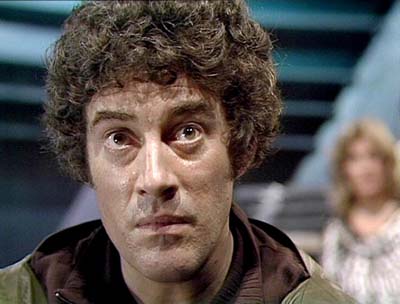