Sweaty Gan seizes the opportunity to act opposite his prize beaker again at the start of this episode (that’s the third time this season he’s shown such range.) Elsewhere Avon, in a fairly unsubtle silver and black striped top, has Blake ask him to sit down and listen to a taped recap of the previous episode’s events. For any viewers who missed it. Avon should have dismissed this with a withering look.

It’s somewhat absurd that a seemingly fairly intelligent group of people on a hi-tech spaceship should take so long to suss out the rather elementary reason for the deteriorating health of Jenna, Gan, Avon and Vila. They did, after all, just spend a significant period on a radiation-soaked planet.

Instead, Blake densely asks each in turn how they’re feeling when they come over all dizzy or faint. And how extraordinary that such a well-equipped ship should lack decontamination drugs (perhaps the System’s people are immune to radiation poisoning?) You’d have thought fearless leader Blake would have checked supplies before sending them down to the planet in the first place. Terry Nation loves his radiation poisoning plotlines, of course. Learning that their condition will deteriorate rapidly and they will die, Vila goes off to throw up. And it’s Jenna’s turn not to wear a bra this week.

There are some nice dissolves used in this episode, such as from the sea of Aristo to the fishtank in Ensor’s lab. The metal prosthetic on his chest is quite well realised. I’m not sure why Orac sounds different throughout compared to the end of the episode (presumably Derek Farr is voicing him, not just when it is Ensor’s voice at the end?) except that perhaps he didn’t want to listen to himself all the time.

Servalan looks quite slinky here. I’m not sure where the scenes in the tunnels were filmed (if they’re studio, then the choice to shoot on film was a good one).

Orac taking control of Zen is an effective indication of just how powerful he is. The discussions over why/how Ensor escaped the Federation’s influence, when he was so important a scientist that most computers feature elements in them designed by him, provide interesting backstory and raise worthwhile questions.

The Phibian that attacks Servalan isn’t the most fearsome of beasts. We’re talking Shrivenzale levels of design acumen here. Calling creatures Phibians is typical Terry Nation (see also Aridians in The Chase). It’s an interesting choice to have Servalan (clearly used to issuing orders far from the battlefield) scream like a girl, before Travis shoots the creature. And nicely played by Pearce in her regaining her composure to show who’s boss.

Travis: The reward’s in credit, remember? I’ll go first, shall I?
Servalan: No, Travis. You will follow me.

Avon starts to become peeved at the intrusive presence of Jenna and Gan in the teleport bay. He asks if Vila is likely to join them too. The Liberator subplot works better than it usually does in this one.

Gan: No. He’s doing his best to convince himself that he feels fine. Says that we’ll just remind him that he doesn’t.
Avon: Sometimes he shows distinct signs of intelligence.

Blake and Cally, unarmed and unable to contact the Liberator (as they are within a force barrier), meet Ensor.

Farr gives an amusingly cantankerous performance here, and it appears that solutions may present themselves; Ensor has drugs for the crew (“I can’t stand them myself. Filthy things, drugs.”) and Blake suggests they take him back to the Liberator to operate on him and replace the microcells in his mechanical heart (but they’ll have to walk to the surface as it will take five hours for the force barrier to dissipate – how convenient for the plot!)

We also learn how Orac functions (he draws information from any other computer, but without requiring a direct link.) Some amusing comic business sees Ensor saying goodbye to his plants and fish, although Thomas does rather play up the wryly-amused reaction in these scenes.

Of course, then Travis blows the bloody doors in and messes things up. This is a solid suspense sequence, with Blake and co escaping into the tunnels just as Travis and Servalan break into the lab.

For an audience knowing that these two plan to intercept them, Blake’s plan to cause a cave-in seems particularly moronic. Especially as Ensor expires in the caves while waiting for him.

It’s just as well that Avon’s showing a bit of sense, recognising that Blake’s been out of contact for too long He summons Vila to the teleport, and an amusing bit of cross purpose dialogue ensues.

It’s Cally’s turn to get attacked by a Phibian, and they only get less impressive the more we see of them. Still, Blake beats its head in with a rock. Which is nice of him.

The confrontation on the surface between Travis and Blake is another well-staged action scene. Servalan gives the Space Commander permission to off Blake, but Avon shoots Travis’ gun hand to pieces just as he’s about to carry out the order.

Blake: Good shot, Avon.
Avon: I was aiming for his head.

Avon seems quite happy to carry out Travis’ suggestion of “What are you waiting for? Why don’t you kill us?” so he’s obviously developing a taste for murder. Blake stops him, but his suggestion of sending a message to the Federation saying that they let the crew take Orac is a bit feeble. Still, I love the last shot of the two of them.

Servalan: You’re in a lot of trouble, Travis.

The look of slightly baffled, slightly amused, inevitability on Travis’ face makes you almost feel sorry for him.

The dismissive logic exercised by Orac in the final scene comes amid a torrent of verbal back and forth with the crew, and gives the computer an instant presence.

As for the prediction of the destruction of (a) Liberator, “Space vehicle will be destroyed”, now we know where Moffat got his death of nu-Doctor Who cheat for Season Six. At least the answer here came in the following episode (albeit nine months later.)

A highly enjoyable season climax. The opposing parties converging on a single goal makes for a suspenseful and well-paced episode.  Some of the plot devices and logic are a bit weak (the old radiation poisoning, the Phibians) but there is a confidence here that comes with knowing you have a solid central plot. And adios Stephen Greif, you were the most convincingly hard-arse Travis of all. 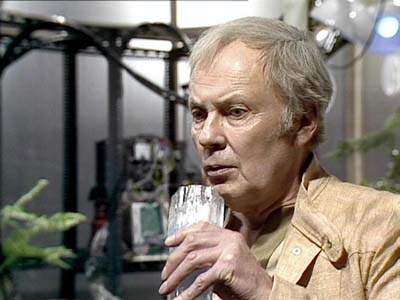 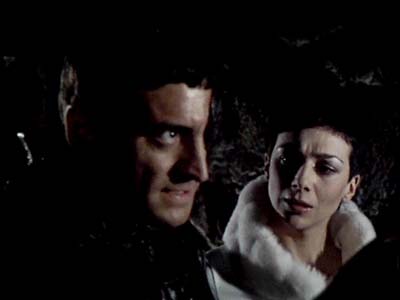 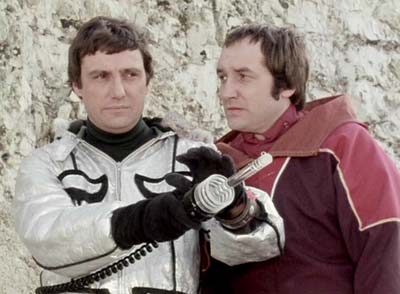 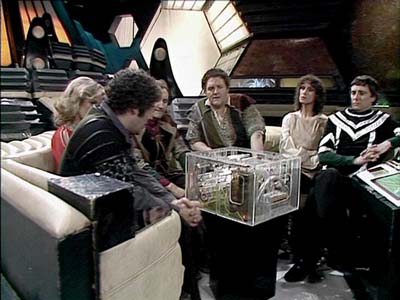