We are ready, the warriors can be released.

This seems to be one of the most renowned season one episodes, although I’m not sure how much of that is to do with its similarity to Star Trek’s Arena and how much is due to the series doing a miniature action movie, courtesy of old hand Douglas Camfield. It’s undeniably well-directed, although the premise and content is fairly slender. Perhaps surprisingly, the most meat on its bones is found with Travis’ interaction with his Mutoid subordinate (although we have already seen a previous episode, Seek-Locate-Destroy, where the best bits were all Federation).

Despite the night-time, lightning-lashed setting, the opening sequence is very clearly shot on video (unlike the forest action scenes later). I suppose it adds to the sense that they could be on a completely different planet for the duel (Jenna thinks not, as the stars seem similar).

Isla Blair (Isabella in The King’s Demons and memorable in the BBC adaption of Michael Dobbs’ The Final Cut) is a vision in a white dress notable for its display of high-visibility nipples. Isla says no to bras, and I think we should be grateful for this. She plays Sinofar, the Guardian of the planet, and Patsy Smart (everyone’s favourite ghoul in The Talons of Weng-Chiang) is the decidedly less principled Giroc the Keeper.

The dialogue between them is fairly mysterious and impenetrable, and when we eventually receive an explanation for the planet’s state of play we are none the wiser over how they were awarded their roles nor, indeed, continue to hold them. Sinofar tells Giroc that only by restoring the balance of power can they be at peace.

Travis has clearly taken delivery of his three Starburst class ships, promised by Servalan. He also has a sexy female Mutoid in his crew. I’d remembered the Mutoids to be entirely female, but there’s a slovenly extra-like male specimen present too. The mechanics of how Travis has ended up lying in wait for the pursued (and energy-depleted) Liberator aren’t entirely clear, but he seems to have worked out his strategy correctly.

We are provided with some intriguing details about how the Mutoids function (they recharge with green blood serum inserted into a chest unit) that manages not to feel clumsy in terms of telegraphing later plot developments.

I found it quite amusing that the reason for Blake, Jenna and Gan first popping down to the planet is to “get some exercise”. Which is cut short by Travis’ attack. Isla Blair really does have amazing knockers. Blake’s shows off some really crummy doodling to illustrate his planned responsive manoeuvre to Travis.

It’s a full 20 minutes into the episode before the hunt-and-kill hand-to-hand combat section begins. I always enjoy a good dollop of slow-motion photography, particularly when voices are slurred to match. Here it prevents Blake ramming Travis. The two of them deliver a series of choice exchanges once transported to the planet, with everyone (on the ships and on the planet) being prepped for what will follow. Blake and Jenna are squared off against Travis and Sexy Mutoid. Giroc refers to Travis as primitive, pompous and stupid, although the description might as well be ascribed to the nature of the duel itself.

The visual effect of the Keeper on the Liberator screen is the same as that used for the Voc’s-eye-view in The Robots of Death. The gist of the situation on the planet, that it was caused by years of war, leaving it barren and radiated, is fairly unexceptional.

Even when separated, the irreconcilable positions held by Avon and Blake continue to be emphasised. The latter views the Federation as corrupt and oppressive; “I will destroy it”. When Blake comments that his endangered companions are here by choice, the observing Avon utters, “Really?” Half of their lesson will be the death of an enemy, the other half the death of a friend (it’s all rather trite).  Travis is splendidly splenetic throughout the seminar they receive on rules of engagement.

The initial forest bound encounter between Travis and Blake is at first highly disconcerting to watch, as the Keeper’s interference in proceedings sees Blake become disorientated. This is rendered through jump cuts and unsettling sound effects. Fortunately for Blake, the Guardian and her lovely breasts intervene and the two of them kick off again.

Blake: How do you demonstrate the death of a friend to a man who hasn’t got any?

Whilst the conversation between Blake and Jenna up a tree isn’t all that stimulating (sitting out the night, which does result in a hilarious attack by rubber bat), it does initiate despairing talk on the Liberator.  Apart from Gan, gormlessly optimistic as ever. Vila opines that they are likely to have the Federation after them until the day they die.

I’m not sure if they were pick-ups, but there are a couple of scenes between Travis and his sexy Mutoid that were shot in studio against green screen. As mentioned earlier, Travis conversation with her offers some fascinating titbits concerning the engineering of the Mutoids. And it also shows his complete lack of empathy, attempting to bait her with information about who she was previously (he clearly looked her up, as he says her name was Kiera, and refers to her as “A beauty, very much admired”).

There’s something a bit Hannibal Lector about Travis’ intellectual probing of the Mutoid’s emotional state, and it marks him out even more clearly as a psychopath (not that it wasn’t coded from his initial appearance, but this may be the first scene where he’s not ranting or bent on extinguishing Avon). As for Kiera Mutoid, the augmentation process she has undergone (and earlier she refers to Mutoids being nicknamed vampires) results in complete ambivalence to personal details and emotional states. (“Memory is an encumbrance.”)

Every episode needs at least one great Avon moment, and this one sees him manage to be both acidic and to intimate that he does care at least a little about Blake and Jenna. He tells the addicted crew members (it’s like Big Brother to them) that he’s going to get some sleep.

Vila: How can you sleep with all this happening?
Avon: With all what happening? Blake is sitting up a tree. Travis is sitting up another tree. Unless they’re planning to throw nuts at one another I don’t see much of a fight developing before it gets light.

When Gan and Vila lay into him, wondering if he has ever cared for anyone, he responds with commendable contempt.

Avon: I have never understood why it is necessary to become irrational in order to prove that you care. Or indeed, why it should be necessary to prove it all. Avon exits.
Vila: Was that an insult or did I miss something?
Cally: You missed something.

This is an early suggestion that Cally has some insight into/respect for Avon. Mind you, Cally’s a bit of a smartarse commenting on the efficacy of the hunting techniques (Travis is daft to build a trap, Blake is super smart to quarter the area in his search).

Kiera Mutoid, in the need of serum, shouldn’t have fed on a rubber bat as she’s feeling queasy.

Travis: There’s a lot of blood in me.
Mutoid: There still is, commander.

So Mutoids are not devoid of wit.

The combat sequences are effectively staged; I like the augmented sound effects as Blake and Travis bang away at each other with their sticks. It’s interesting to see the production team consistently ensuring that Avon is up to the same speed (or quicker than) as Blake. Here we cut to him shaking his head, smiling, as Blake has the chance to off Travis (and then declines to do so).

Blake again offers the rather lame reason that he knows he can beat him for keeping Travis alive. Then a somewhat more satisfying one.

Blake: Another reason I didn’t kill Travis. I would have enjoyed it.

A rather lovely little (little as in, unlike Dudley Simpson) spacey signature used for the departure of the Liberator.

For the third week in a row Jenna gets jealous of Blake, discussing Isla Blair.

Travis is, unsurprisingly, a real tosser when it comes to the fate of Kiera Mutoid. Isla offers to heal her and he dismissively notes that she’s of no further value to him. Back on the ship, he just rubs it in (she’s been healed anyway), telling her that it will be up to the court martial to review her failure (she blames it on the lack of serum but he doubts that it will help her case).

Travis: What happens to Mutoids that leave the service?
Mutoid: We exist only to serve.
Travis: Oh? Well, you’ll probably cease to exist, then.

Creating sympathy for Kiera Mutoid is an unexpected development, and a welcome one as it adds a texture to the struggle, suggesting that the Federation isn’t just the polarised force that the attitudes of Blake and Travis would imply.

The last conversation between the Guardian and the Keeper offers a rather pat verdict on Travis.

The Keeper: It is good to see a man like Travis again after so long. He reminds me of our people.

The choice to emphasise the ambiguity of the hows/whys of their presence (“You keep us prisoners, Giroc” says Isla) is preferable than spelling everything out for the audience, but it does rather underline the Trekness of the premise (God like powers intervene and set the plot in motion only to be taught something about themselves).

Perhaps not quite the zenith of the season it’s sometimes made out to be. Nevertheless  Camfield directs a tense and dramatic episode that sheds more light on the Federation and provides a fascinating insight into Isla Blair’s chest. 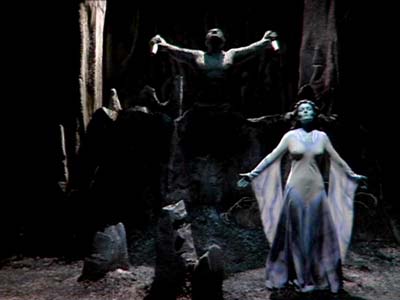 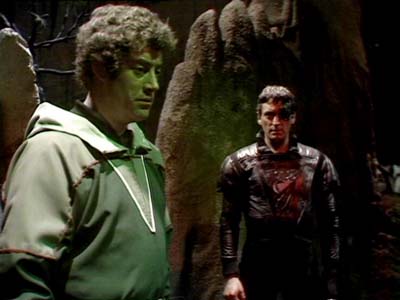 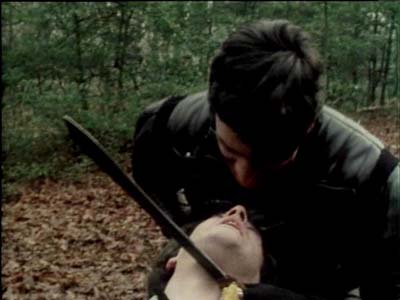 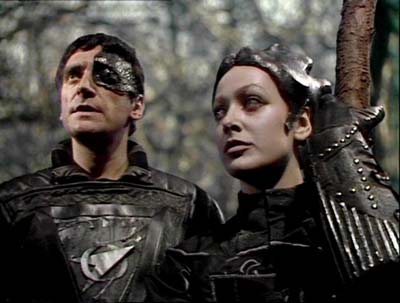