There’s a considerable amount of talk in this episode, partly due to the introduction of two new regular characters and partly due to the amount of exposition focusing on Blake’s background and the mechanics of the Federation. Fortunately, it’s almost all interesting and certainly all of it is delivered by commanding performers.

However, the first quarter of the story is mostly action-based with Blake finally reaching Cetero. After all the build-up, it’s not really all that. Indeed, it looks rather surprisingly like a 1970s industrial site so there’s a distinct pattern forming here for the series’ locations (quarries and factory premises). It does at least present a fairly unified image of an austere, drab, functional Federation where every planet has been reduced to the same level of artless productivity.

The object of Blake’s mission, to obtain a Federation cipher machine but not let the Federation know it’s been stolen (by destroying the room that contains it) is not all that inspired. To that extent, this opening passage is serviceable but only really promises a run-of-the-mill instalment. There’s a shit kiddie robot patrolling the site when Blake and Vila arrive, which somewhat undermines the gritty tone being aimed for. More successful is the attempt to make the lock on the decidedly unimpressive gate convincing.

Vila: There isn’t a lock I can’t open – if I’m scared enough.

Vila’s “distract the guards so Blake can bosh them” routine is quite amusing and with the preliminaries dealt with Gan, Cally and Avon join them.

Avon: That’s the trouble with heroes. They rarely run to schedule.

The mission is successful, although Avon and Vila have a bit of a squabble.

Vila: You were supposed to disconnect that thing, not rely on Gan to tear it loose with his teeth.

Unfortunately Cally is captured (the crew don’t notice this immediately on their return to the Liberator, which is a bit remiss). One of the Federation fellows who captures Cally, Prell, is played by Peter Craze (Costa in Nightmare of Eden and also in The Space Museum and The War Games). All of this sets us up for the rest of the episode.

Which would be rather bog standard if wasn’t for the enlivening introduction of Servalan and Travis. Also on the base is Escon (Ian Cullen, Ixta in The Aztecs). Jacqueline Pearce appears fetching as always as Supreme Commander Servalan (here, before she became a bit of a drag queen caricature, she’s really very attractive), and her wheel in space base (Federation Space Command headquarters) is another nice bit of model work for the series.

Her lengthy conversation with two emissaries of the President, Secretary Rontane (Peter Miles, of Genesis of the Daleks and The Silurians fame) and Senator Bercol (John Bryans, Torvin in The Creature from the Pit) provides us with some welcome expansion upon the inner tensions of the Federation.

The subtle sparring between Servalan and Rontane is enjoyable (Miles is on good, restrained, form) as we learn that Servalan has been tasked with dealing with the fall out of Blake’s raid on the Communication Centre. The early impression of the season, that the Federation is an all-pervasive monolith that cannot be questioned, is slightly dented here as it’s clear that rule by gunpoint isn’t necessarily how it goes about its daily business. There is also the need for political subtlety. It appears that it is possible for disgruntled outer planets to withdraw from the Federation (or openly threaten to) suggesting that in practice it may more resemble the EU than the overtly totalitarian regime of The Way Back.

It’s also apparent that Blake’s legend is spreading , his name is “a rallying call for malcontents of all persuasions”. It’s nice to see that Rontane is not remotely intimidated by Servalan (he’s reporting directly to the President after all), and unconvinced by her downplaying of Blake as “just a man”.

Rontane: One vulnerable, lucky man is still free to cause havoc.

“Space Commander” is a typical clumsy Terry Nation title. Fortunately, Travis’ background is more inspired. We learn that he was suspended pending an inquiry into a massacre of civilians on the planet Auros (a bit too similar a name to Auron, really) and that Servalan has cleared him of this on the grounds that it was unavoidable. So again, the Federation requires the appearance of order and law and those representing it cannot just run amok without consequence.

Servalan: He has not time for the dirty, grey areas of your politics.

Like Blake, Travis sees the world in black and white terms. Indeed, in Nation’s space western he’s positioned as the black hat (or black leather-clad hatless) and to Blake’s white hat. Servalan shows typical villainous over-confidence (“You may prepare a statement that Blake has been eliminated”).

Rontane’s manoeuvring to distance himself from any fall-out should loose cannon Travis make a scene is deft, as is Servalan’s parry.

Servalan: Responsibility is something I have never evaded, Secretary.

It’s easy to understand Avon’s loathing for Blake’s moral rectitude when we get a scene where he indulges in some pathetic self-recrimination over the loss of Cally.  Blake’s right to take the blame, though.

Servalan’s conversation with Rai (an old friend) again informs us that there are standards within the Federation, that it is made up of people with moral values just like any system. Rai labels Travis a butcher (he continued with his attack after the Auros surrendered and the consequent death toll was horrifying). He is told that any lack of co-operation from his fellow officers will be treated as mutiny. Servalan’s defence of Travis’ ruthlessness quickly identifies her as the embodiment of what Blake is fighting again. But it is clear from this episode that she is not really representative of the Federation, only Blake’s vision of it.

Servalan: An enemy does not cease to be an enemy simply because it has surrendered.
Rai: That’s the philosophy of an assassin, not a Federation officer.

The encounter between Servalan and Travis sets up the dynamics of their relationship well. He’s her attack dog, but a smart attack dog. She tries to play power games by having him wait outside her office, but he barges in with no interest in formalities. There’s zero subtlety in Travis’ visual presentation or manner; like the Master he’s a villain because he’s a villain. Some of his rather shallow motivation doesn’t make too much sense, mind. If he was so obsessed with Blake that he refused to have his face fixed (so Blake wouldn’t forget what he looked like), it seems unlikely that he’d have sat by and waited, rather than kill him, for all the years that Blake was brainwashed.

But the scenes that ensue on Cetero, where he deduces that Blake visited the facility to take something, show he’s not to be underestimated even if it’s easier to use him simplistically. It rather beggars belief that they only find Cally (she’s not very hard to find) when Travis gets there; they must be quite slack when it comes to tidying up.

This episode also has the first mention of Mutoids (individuals with a high bionic rebuild), whom Travis wants for his crew (he also demands the only three Starburst class ships built so far).

The tale of Blake’s encounter with Travis uses the effective device of having Travis begin and Blake finish it. Having Blake use Travis’ trick at the end of the episode (Travis arrived at the sub-basement meeting early and waited there for two days) is a bit of a groaner in how neat it is, though. I’m not sure why Travis says the encounter was “early on” (Blake had only been involved with the dissidents for a short time) as Blake then tells us he was tried directly following the incident (we’re also told that the resistance movement collapsed after this).

It’s also interesting to note that Blake thought he’d killed Travis (who killed 20 of Blake’s friends). This ranks him alongside Gan as a crewmember who was already willing to kill; neither is your common or garden criminal, but in that camp Avon and Jenna (as far as we know at this point) hadn’t killed anyone at all when they fell in with Blake.

Another principled Federation type is the Doctor treating Cally, who tells Travis that she must have rest and should not be interrogated. So there’s definitely an intention here to show that the Federation isn’t just full of bastards. The interrogation itself is a bit unclear; it seems to involve pouring some sort of liquid.

How does Travis know the Liberator’s teleport range? He says that a quarter of a million miles (where the Liberator is orbiting) is outside of range but that must be a guess. While his trap for Blake is well-devised, he does seem rather quick to agree with the opinion that the ship only flew in close for a recon. Why doesn’t he at least consider the possibility that Blake transported down at that time? As for Blake’s decision not to kill Travis, it’s decidedly lame; there’s no point in killing him because the Federation will just send someone else in his place.

Blake: Killing you will change nothing. You don’t matter enough, Travis.

Even if he hasn’t killed anyone, I don’t think Avon would have been so high-minded. Greif gives good villainy in his scenes with Blake, and I like Travis’ cry of “It doesn’t matter about me”, encouraging the guards to shoot Blake despite his being in the way.

Back on the ship, amid all the jubilation at Blake and Cally’s safe return, Avon’s pause before “Yes, I’m glad you’re alright” is very funny. I’ll leave the final remarks to the rather fixated Travis.

Travis: Run, Blake. Run. As far and as fast as you like. I’ll find you. You can’t hide from me. I am your death, Blake.

The introduction of Servalan and Travis gives the series a villainous focus and a shot in the arm just as it might have begun to drift a little aimlessly. The time spent with the Federation is by far the best part of the episode and promises a more complex view than Blake has primed us for. 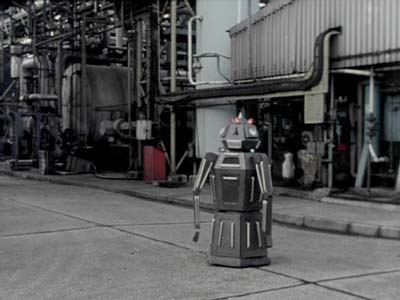 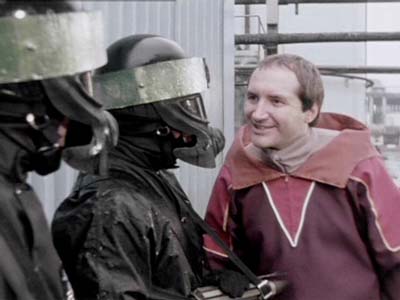 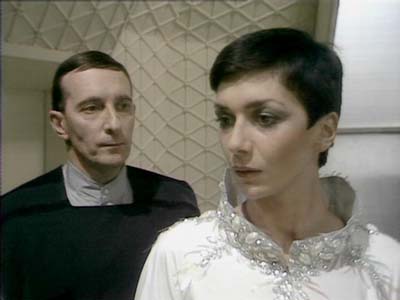 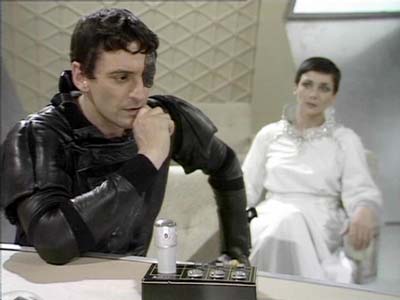