No, I’m coming back.

I probably buck the trend when it comes to appreciation of Blake’s 7, in that I enjoyed it more as it went along. Season One, at times, felt too much like it was emulating the drab monotone of the dystopian Earth we’re introduced to in the first episode. That said, I don’t think I’ve seen any episode of the series more than four times, and the vast majority no more than twice, so I’m looking forward to discovering new things to like (or not) about it. For the most part I’m going to avoid straight plot recaps, so it may sometimes seem like a slightly disconnected collection of impressions and observations. As a curiosity, I’ll be noting cast members who also appeared in Doctor Who roles, and parallels to that series where it seems appropriate.

The structure used for the first episode is probably its most compelling feature, throwing the viewer into the action behind the point Blake has reached, which is far behind where his former compatriots are (I have to wonder if his image at trial wasn’t widely circulated, but even then he kept the same name, so why has no one to come up to him in four years and asked, “Weren’t you that resistance bloke?”) It then becomes an against-the-clock drama focussing on Blake’s defence counsel before reaching an inevitable conclusion (if it is to be a series, not a one-off play).

While the budget is clearly on the tight side, the location filming adds much to the believability of this gritty ‘70s version of the future. It’s somewhere between THX1138, A Clockwork Orange and the ’80s 1984 in setting its locations in a harsh industrial landscape of concrete and darkness. The minimalist dome interiors never achieve that sense of scale, but they do mimic the austere barrenness of the exteriors (with a bit of muzac). Michael E Briant was always particularly on form with his Doctor Who location work, and that’s true here.

Blake’s meeting with resistance (Alan Butler, Dal Richards, was Buller in The Talons of Weng-Chiang) serves us a fair bit of information rapidly (his brother and sister are dead, not alive as he believed, the populace are victims of drug induced tranquillity – very The Sun Makers – and he received brainwashing treatments). It’s a nice touch that he’s not an innocent dragged down the rabbit hole (The Matrix) but someone who’s been down there before for a long time. He’s also told that if he talks to anyone he’ll be incriminated with forged documents – the bastards!

Robert Beatty as Bran Foster is one of those faces you’ve seen all over (General Cutler in The Tenth Planet). Briant creates an effective sequence where Foster’s discussion with Blake leads into the latter’s flashback to brainwashing. He focuses on Blake’s eye and cuts with Foster’s mouth recounting events (which is a bit Sergi Leone), and then fades into the flashbacks. Blake on the treatment table, the camera dollying in, surrounded by darkness is a defining image, and the cuts to Blake being caught and beaten by a Federation guard are all the more effective by having Foster’s voice as the only sound. The Federation uniforms are a superior piece of design; not as slick as Star Wars’ Stormtroopers, but carrying a more believable post-WWII gasmask/Blitz vibe.

Again, Briant deserves plaudits as he shoots the build up to, and massacre of, the resistance with a feel for tension and geography. I’m sure machine guns rather than smoke squibs would have been even more visceral, however.  But his repetition of the brainwashing flashback seems like having a good thing and overindulging it.

That said, it does provide an effective bridge to the off-kilter (handheld) analysis scene in which Blake is interviewed. We experience this through fade-outs between him and Dr Havant. This makes for an increasing sense of disorientation, where we are encouraged to identify with Blake even though he has a fairly slender grasp of who he is.

The cynical discussion between upper members of government over Blake’s fate (viewing his interview) works very well. I particularly liked the validation of conspiracy theorising (elements of the youth believing that Blake’s original was a show trial) and the rejection of him being administered a terminal disease. With deportation to Cygnus Alpha decided upon, it’s interesting that a female character delivers the coldest suggestion of all (Alta Morag). Initially I thought the proposal of implanting experiences was something they planned for Blake, but in the following scene with his defence counsel we discover she’s suggested implanting children with memories of abuse by Blake.

It’s probably this element more than anything else in the first episode that sets it apart as “adult” SF. Offhand I can’t think of the series choosing to tread quite so overtly on such sensitive subject matter as it progressed. Accordingly, it might be viewed as a slightly cynical move on the part of Nation and co. On the other hand, this was the ‘70s, and the series was reflecting the decade’s gritty trends, which held sway up until Star Wars’ overpowering influence of began a few months earlier.

I should mention Jeremy Wilkin’s performance as Dev Tarrant; a bit of a nothing part really, after his great turn as Kellman in Briant’s Revenge of the Cybermen. Sure, he gets to limp and wear a crap tunic, but there’s no character for him to chew into. He would, of course, be a namesake with a regular character come season three.

I like the way that the episode evolves into a legal drama, with Tel Varon gradually becoming convinced of Blake’s innocence and embarking on his own investigation with his lovely wife Maja (Pippa Steel – Lust for a Vampire and Gerry Anderson’s UFO).  With jack-booted Federation guards at every corner, we’re bound to consider Varon naive to be shocked at the prospect of corruption at the highest level of government. Notably, the Federation is called the Terran Federation here, but not very often during the series.

There’s something ever so slightly Megara (The Stones of Blood) about the Justice machines at Blake’s trial (the Doctor Who story was broadcast at other end of 1978, though).  It’s an amusing conceit that the only part of the trial not to feature people is the verdict (and the format of the trial suggests that most are a fait accompli, though presumably Varon’s efforts indicate that reconsideration has been known – perhaps where there is no state interest in the case).

Blake’s guilty on all (eleven) charges and receives a Category 9 rating. I’m not sure why Tarrant shows up at Blake’s trial, other than for the expediency of the plot (he was worried a few scenes earlier about not being identified yet now he appears with all but a fanfare). Margaret John (Megan Jones in Fury from the Deep) plays the court Arbiter.

The introduction of Jenna and Vila about 30 minutes in provides a bit of relief (but not too much) from the grim tone. Sally Knyvette’s performance is pitched very similarly to Gareth Thomas’; Michael Keating seems a bit self-conscious at this point, his lines feel very much “delivered” (he nevertheless has a rapport going with Knyvette).

The dialogue economically sets them up as smuggler and thief (although Keating’s actions do that too), and in Jenna’s case she’s clearly a smuggler with a heart of gold (and quickly develops a bit of a thing for Blake – by the episode’s end she’s rooting for his acquittal). Also of note is that, even if glamorous hairstyles are a no-no on Earth, off-world smugglers clearly frequent a few high-class establishments. And dress up a bit, too.

The computer operator (Nigel Lambert – Hardin in The Leisure Hive) listening to/watching a portable disco in the public records office is a bit cheesy, although his decision to call security after the Varons have checked the records at least exposes him as a nasty cheesy tool. The escalation of threat involving the Varons highlights just how hopeless Blake’s predicament is. Going to his superiors, Tel realises they’re in on it. So he’ll go to the President (yeah, good luck there). Spending time with this doomed couple also invests us more with Blake by the end of the episode, as he’s the only decent person left. It has to be said that Tel’s a bit foolhardy to get his missus involved, and even more so to drag her out of the dome to the location of the massacre (very lazy of the Federation not to clean up, too). The reveal of their bodies as the prison ship lifts off for Cygnus Alpha is particularly chilling (the model shots, and the mattes of the dome are convincingly achieved).

The now-in-confinement Blake’s pronouncement that “No, I’m coming back” on being told that’s the last he’ll see of Earth is a rousing sentiment (which he does, but not with any great fanfare or impact). Which sums up the series’ hopeless, against-the-odds tendency right there.

Not perfect, but not far off. This is tense, dramatic and replete with high stakes moments. Briant creates a despairing vision of the future and Thomas’ everyman hero leads us earnestly into this bleakness. Nation’s script (and no doubt Boucher’s editing) also keeps proceedings moving effectively. Still, what this series really needs is a callous amoral antihero to stir things up… 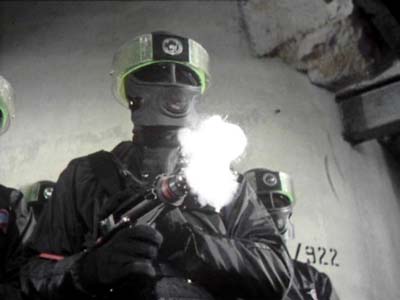 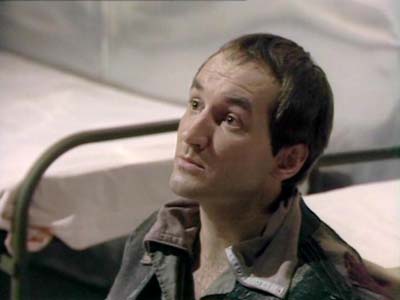 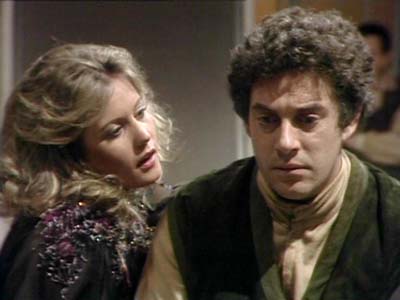 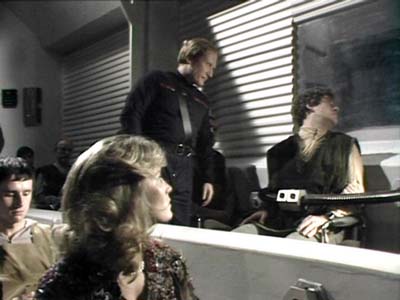